The IGS HICES Middle Division, of Years 7 and 8 debaters, won their Round 2 debate versus Kinross Wolaroi school.

Over the past two weeks, the team prepared diligently to argue the negative case to their Round 2 debating topic, “That acts of terrorism should not receive media coverage”. They met at lunchtimes and outside school, and conducted individual research at home.

Building on a win earlier in the term for members of the HICES Senior Team of Gemma Barker-Tomkins, Oliver Guthrie, and Timothy Bardos, their hard work and preparation paid off.

On a rainy Wednesday morning, they met on Zoom to compete with Kinross Wolaroi school in Orange, passionately and skilfully making the difficult argument that terrorism deserves media coverage, but its most egregious acts have no place in mainstream media.

The first speaker, Zainab of Year 8, eloquently laid down the argumentative gauntlet that was expertly taken up by another Year 8, Oliver as second speaker.

Auden, new to IGS in Year 7, gave a searing denunciation of the flaws in the opposing team’s arguments. 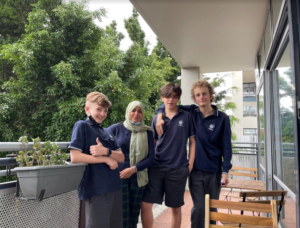 HICES Debating Coordinator and Head of English and Philosophy Thom Marchbank said he couldn’t be more proud of the team.

“These students thought carefully about a model of media representation and ethics that they felt was defensible, and characterised that model brilliantly,” he said.

The HICES Senior team of Years 9 and 10 students will contest their Round 2 debate in Week 11.