IGS Drama students are excited to venture back to the theatre.

Years 11 and 10 Drama students saw the “visually beautiful and confronting” Wudjang Not the Past at the Roslyn Packer Theatre this week.

“Through seeing and appreciating theatre, students are encouraged to have deep conversations about what is made and how they themselves can be inspired to bring this into their own work,” said IGS Director of Dramatic Arts Rita Morabito.

“It was wonderful for the students to be back at the theatre,” Rita said. 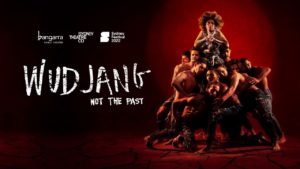 Here are some of their reactions to the show:

Nell Brennan: Getting to see Wudjang: Not The Past was a truly amazing experience for both myself, and I believe, everyone else who was lucky enough to be in that theatre with us. It was such a magical experience, being able to hear and see stories told by First Nations people and this performance will certainly not be forgotten.

Yulan Kung: A moment during the Wudjang performance which impacted me the most was when four young girls moved with each other to the music. They huddled together, frightened, each girl would separate grabbing different parts of their body screaming in agony as the others desperately try to hold each other up. This was definitely something that lingered with me after the show as it portrayed violence specifically against women.

Samantha Lee: The Wudjang performance presented an emotional experience for audiences, with entertaining, yet historically educative aspects. It provided an insight towards the Indigenous culture, and effects of the past through a flow of movement, song and expression. 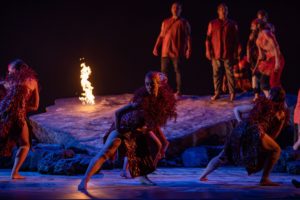 Sabrina Turner: One of the moments which impacted me most was when the women came out in simple dresses marked with a meaningful, brutal “X” which represented the targets that First Nations women had on their backs and how they experienced mistreatment. This is still applicable today to women everywhere which made the following line all the more haunting, “They are our mothers, they were survivors, they have descendants now.” Their words still echoed after the scene faded to dark.

Antigone Marchbank: Everything about today’s performance was incredible; from the synergy of the Bangarra dancers, to the intense emotion conveyed by the leading performers, this was truly a memorable drama excursion!

Eve Moss Ractliffe:  A hauntingly beautiful production that spotlights indigenous trauma and culture and
depicts the narrative of the past, the present and the future. A cast of dancers and musicians stand upon stage lathered in mustard ochre and adorned with Yellow Wattle. Above them, golden flower petals flutter down catching in their clothes and hair. They sit in a semi-circle formation and in the centre lies a figure covered in Wattle, Wudjung. Next to them, stands Gurai in solidarity looking out over the procession, silhouetted by the glowing blue of the screen behind. There is a heavy blanket of mourning that settles on the group, but behind that, a sense of hope

Ash Carter Brecht: The dancers moved through and around the stage as if there was no gravity, displaying acrobatic skills to accommodate the impressively choreographed dance. The acting was meaningful and emotional and created an intense, sombre environment.

Hugo Deutsch: The play is like a moving artwork ever-changing and creating new meaning. The play is a must watch and despite its dark themes has an uplifting ending.

In related news, Drama students in Years 11 and 12 are invited to go deep by applying to become ambassadors for theatre. We are pleased to announce that the following students have been accepted as Griffin Ambassadors and that Edward Hopper in Year 11 was also selected to be part of the Young Belvoir Club Program in addition to his Griffin Ambassador role!

“I have been selected to be in both the Griffin Ambassador and Young Belvoir Theatre Club program,” Edward Hoper said. “During 2022, I will be invited to see the upcoming performances, and I will be included in actor and backstage workshops.

“Through these workshops, I will be learning how these theatres create their works – as well as see the full year of plays. This is a chance to deepen my learning and understanding of theatre and Drama.”