Students across year levels were challenged by theatre experiences and collaborations across PDHPE, Drama and English.

Year 9 watched The Stones, a play about a real event and risk-taking behaviours, that has toured internationally for many years.

Year 8 watched The Lucky Country, a touring play created by International Grammar School students together with Zeal Theatre which deals with racism and acceptance.

Sydney University final year Practicum Teacher at IGS, Olivia, said “Zeal’s performance was skilful, engaging and impactful, and it was a wonderful experience to observe how captivated students were by the content and delivery of their show.”

“The questions that students asked following the performance were pertinent and showed a high level of critical enquiry and understanding of the topics.”

Year 10 and 11 Drama classes watched City of Gold at The Sydney Theatre Company.

“We were surprised and very moved to hear that the writer and performer of City of Gold, Meyne Wyatt has dedicated the Sydney season to Jai Wright.

Year 8 and 9 students watched the Zeal theatre shows and then took part in thought- provoking discussions and follow up Drama workshops.

Enjoy these student reflections on City of Gold.

Caitlin Elliott said: “City of Gold is a very confronting and relevant play. It was written for the audience to just listen and the messages were really powerful and impactful. The use of costuming was well thought through and useful because of the non-linear time line. It discusses the roles of women and their responsibilities and how they are biased. It was written to start conversations and evoke emotions within the audience and cast.”

Georgia Spring said: “City of Gold was an incredibly written and a heartbreaking performance. The set design was original and made a true impact on the play. Everything about it was confronting and powerful.

Audrey Storer said:  “City of Gold was by far the most impactful performance I’ve seen in a school excursion so far. A diverse range of incredibly talented actors coupled with a massively powerful script allowed this show to bring me and many of the audience to tears multiple times.The set was perfectly crafted to complement the scenes and was a vessel that allowed the actors to create breathtaking tension. This show managed to tackle some incredibly dark themes while maintaining humour, love, and exploring the beautiful relationships between the characters.”

Annabel Johnson said: “I hadn’t expected City of Gold to be as thought provoking and emotional as it was. I wish I could see it again to fully appreciate the story. It was truly unforgettable.”

Tiffany Chan said “This play was about how the Australian Indigenous community are affected by racism in terms of police brutality, the healthcare system, and just casual everyday prejudices. I thought this play was very confronting and powerful. Bringing these elements together created a very influential play, that was frighteningly realistic. I was really grateful I was able to watch this play as I felt I learnt a lot.

Jack Block said: “City of Gold is one of the most creative and challenging works of storytelling I have seen in a long time. Each of the characters had an entirely different world view on the prejudice that the Aboriginal community constantly faces.”

Caitlin Elliott said: “City of Gold is a very confronting and relevant play. It was written for the audience to just listen and the messages were really powerful and impactful. The use of costuming was well thought through and useful because of the non-linear time line. It discusses the roles of women and their responsibilities and how they is biased. It was written to start conversations and evoke emotions within the audience and cast.” 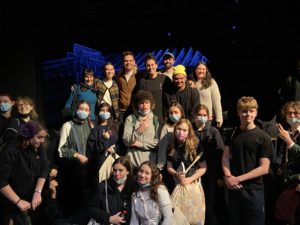 Below are some Year 8 student work from the poetry workshops.

Art is the music of our soul at full volume: Gretel
Art is like water it comes in many forms. Art is a lake it reflects the vision of its
creator: Elyse
Art is like a flowing river. Art is the beat that is in our heart: Frankie
Art is the quiet spaces of the world. Art is freedom and all that is good: Lucca
Art is like a criminal because it has no rules. Art is a skill because you get better and
better at it: Angelo