Multi-talented IGS teacher, actor and writer Ned Manning has published a historical romance, and the IGS community is invited to the launch.

Mr Manning, who has previously written 30 plays and a memoir about teaching called Playground Duty, spent 10 years writing the new story, Painting the Light, loosely based on his parents’ lives.

The book, set before, during and after World War II is described as “a story of love, idealism and commitment to social change in a time of deep conservatism” which will “surprise and delight”.

The launch will be held at Gleebooks at 49 Glebe Point Road on Friday 10 June at 6pm for a 6.30 interview with Annabel Crabb. Click here to book.

Members of Mr Manning’s Year 8 class were interested to hear about the process.

The students asked his advice on writing so many words.

“My biggest thing is not to critique yourself as you write,” he said. “Just write.

“It’s been a labour of love. If you want to do something, do it. No one else is going to do it for you. You’ve got to do it.”

Listen here to the recent ABC Conversations interview about Painting the Light. 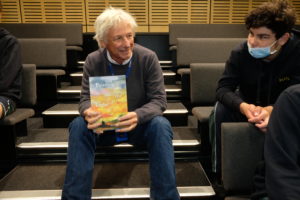 Reduce your plastic by sharing pictures