Olivia Stewart of Year 12 has joined Ian Thorpe and the Equality Australia campaign to fight for the rights of young people who are transgender.

“Liv’s role on the national stage this week was important and influential. She spoke with integrity and courage and I was moved by her quiet dignity as she shared her story.”

At Parliament House, Canberra, earlier this week, Liv spoke about her experiences of being a student who is transgender. 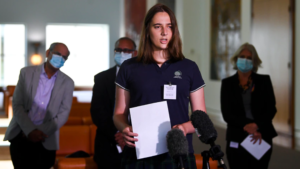 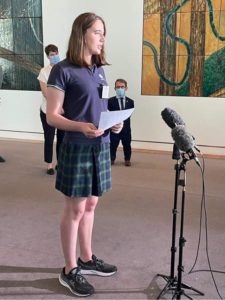 Olivia has shared the full speech she gave at Parliament House:

My name is Olivia Stewart. I am in my final year of school and I am also transgender.

I had known my gender identity for a few years, but finally I came out at the age of 13 years old.  At the time I was attending a private Anglican school in Sydney and when my parents explained to the school executives, during the December holidays, that I would be starting Year 8 as a girl, the school provided a large number of reasons about how they were hesitant about this. They said I would not have access to changerooms and toilets, explained that I was very likely to be bullied, my twin brother at the school, would also likely be bullied and his potential for school leadership positions would be jeopardised. They also said that they would have to send an email to every parent in the school telling them there would be transgender child at the school, an action which would serve to worsen potential bullying.

Then they said that I would not be happy at their school and that if I just left the school there and then, my parents would not have to pay the next term’s fees. They made it clear that they would never accept me transitioning at their school. I was devastated to leave as I really liked the school, the teachers were good, and I liked the style of teaching and learning there. I also liked being at school with my brother and had made some good friends.

I felt rejected and unwanted. In such a difficult time of change, I would have to also deal with starting a new school on top of that.

For a few weeks I didn’t have a school to attend for Year 8. I remember feeling quite lost and hopeless about what was going to happen to me.

Eventually my parents found another school that would take me, and I enrolled there. From the second week, I was bullied almost every day for being trans – I was called slurs and harassed with vile comments. On a few occasions, I was physically bullied by a group of older boys too. I had started having terrible nightmares about school and I was so afraid that most days I didn’t even want to go to school. The school was unable to protect me. So my parents and I decided that I had to move schools again.

After this I enrolled at International Grammar School in Sydney.

Starting over again was difficult, not knowing anybody, not knowing where to go and what to do, and starting in the middle of the school year when everybody else was settled in. After what had happened in the previous two schools, I felt so bad about myself, and so scared of engaging with other students, that I really struggled to talk to anyone. I was so depressed and withdrawn in those first few months that I probably put people off talking to me, too. It was a very lonely time for a while.

Fortunately, my school is a safe and accepting environment, one where they were happy to have me as a student. This made all the difference, as, over time, I was able to open up and feel more comfortable in my day to day life.

Having a school that fosters a diverse environment where everyone is accepted allows all the students there to adopt a more open mindset, and as a result, I have never been bullied at this School. This accepting environment also meant that I felt as if I could be supported by the School, with teachers I could talk to.

Being in such an accepting environment has made a huge difference to me and my mental health. As a young person, school is most of your life. A safe environment should be considered a right for all students. Being in a more accepting school has allowed me to return to studies and look towards my future.

Everyone has a right to feel happy and safe at school, trans students too. We just want to be able to be ourselves, to get on with studying and learning as normal, just like any other students. That is all we want.

One IGS Alumna felt so moved by Olivia’s message that she sent a message to Principal Colnan, thanking the student and all IGS staff.

“Inspired by my wonderful teachers, I am now a (very proud) secondary Visual Arts teacher,” she said. “I am writing to you to share my sincere gratitude, respect and heartfelt appreciation of one of your students.

“Yesterday I saw a post online from Equality Australia with a photograph of one of your students, wearing their uniform proudly, speaking against the religious discrimination bill. I just wanted to reach out to you personally, and say how humbled and appreciative I am to see that students of IGS remain politically and socially engaged, and continue to stand up and speak out against injustice.”

Enjoy our international activities and resources