A group of Years 5 and 6 students "competed admirably" at the recent Paul Kelly Cup, the largest Primary School AFL Competition in NSW>

IGS Head of Year 10 Lawrance Hunting said “students competed tenaciously throughout the day, winning two out of three of their pool games against South Coogee and Newport Public School respectively.”

“IGS’ performance earned them a place in the semi-final against a very well drilled Moriah College team, where they competed admirably but were defeated. IGS’ strong performance on the day will no doubt provide a platform for any Primary School students who are interested in playing in future AFL tournaments.” 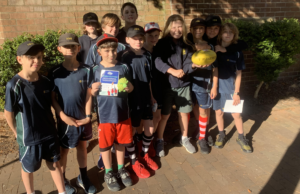 Go deep and produce something great

All bets off in Mathematics Extension