Jordan: Oh, I’m great. Thank you. How about yourself?

Paul Galea: Good. Good. Now let me just introduce you to our listeners and readers. You’re Jordan King-Lacroix who left IGS at the end of 2006 and you are recently a published author of a very interesting looking book called Ugly. The Story of Phil “Ugly” Mawson. How about you let us know how you got to that time in your life where you’re writing a book about a bikie, Jordan. That would be quite interesting, I believe.

Jordan: Well, it’s funny because it’s one of those weird turns where someone came to me with the idea for the book. So I’ve been doing short stories and getting some poems published, and I did a fringe show, and I was writing a screenplay for somebody, and then, a family friend, Paul Fenech, who has done Fat Pizza and Housos, came to me and said, “Hey, how would you like to write a book?”

And I thought, well, that’s something that I’ve been working on. But I’m always wary when somebody says I’ve got a great idea for a book because most of the time they’re not that great. So he sits me down and we have a chat in person and he tells me the story of Phil “Ugly” Mawson, the bikie who founded the Sydney chapter of the Gypsy Jokers Motorcycle Club.

He had this long and storied life and Paul Fenech says, “Well, are you interested in writing this book?” I said, absolutely and so we do. He gives me these long tapes of interviews that he had done with Ugly, and I went and did some other sit down interviews with him, basically to flesh out some of the details of the story. And, yeah, we got picked up by Penguin Random House. That was three years ago and it came out in August 2021. 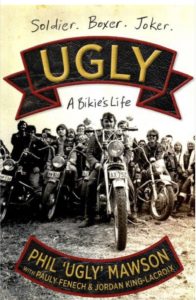 Paul Galea: Oh, fantastic. Now you said you were doing some poetry and writing short stories. When you left School was writing something that you always wanted to do? Or did you go on another path straight from School? Because it has been 16 years.

Jordan: Oh my God. Don’t say that. It makes me sound very old. Yeah, 16 years. That’s wild. Yeah. Writing was something that I always wanted to do. So I’ve kind of been turning my eye to it since, like the fifth grade.

You know, since I was 11 I’ve been thinking about wanting to write, but I went to university when I got out of school. I went to Sydney Uni. I did a Bachelor of Arts majoring in English, film studies and Yiddish, to reconnect with a lot of my Jewish family roots.

When I was there, I not only got to read a lot of fun books, which was really great but I also got to write a little bit for one of the Uni newspapers, a couple articles here and there.

And then I did a Masters of Creative Writing, which really kind of focused on how to write larger things. That is, how to write a novel or how to really get started on doing a screenplay or a collection of poetry and that sort of stuff. So it’s been a pretty intense focus of my life to kind of get to this point.

Paul Galea: Okay, now I’m going to say this as delicately as I can, but being a writer doesn’t always pay the bills. Is that how it was for you or did you manage to get your writing to fund your life? Or did you have scholarships or work part time?

Jordan: It doesn’t really pay the bills. Unfortunately for anyone who is aspiring to write out there, the average writer in Australia makes about 11 grand a year, and that’s if you’re lucky. It doesn’t really pay a lot unless you really kind of strike gold. So you have to treat it like a second job that you do outside of your regular day job.

So I work in television. I edit stories for documentaries and that’s my day job. That’s what pays the bills. And then with my spare time, like after work or on the weekends, I will work on writing projects.

Paul Galea: And I heard that you you did Film Studies. So any any aspirations to actually make a film at some stage? Or maybe even make a film of your book?

Jordan: I would love to do a film or a TV series out of “Ugly”. I think Paul Fenech originally, when he had the idea for “Ugly”, the intent was to make a docu-series.

For some reason, that never eventuated. But I think now it’s a book, hopefully, there might be enough backing to, maybe, sell the rights to a production studio to have them do it. I would love to write a film. I have a screenplay sitting with a director at the minute, but you know, it’s not exactly a fast process.

Paul Galea: No. My old man had a a novel that he wrote about my grandfather, who was a colourful underworld figure, and it was in the works to be made into a film for years and years and years, and eventually, nothing happened. It’s an interesting process, isn’t it.

Jordan: Yeah, it’s a lot slower than you think it’s going to be. You know, you sort of assume that you give the publisher the manuscript, and maybe it’ll go through a couple of rounds of edits, and then it will be out, like later that year, or maybe the next year. But it’s really a couple of years of processing and editing and rejigging.

And if you do nonfiction about living people the way that I did, the lawyers get involved in a very heavy way. And so that worrying about defamation or slander or any sort of that stuff is obviously like a super big part because the production, the publishing house wants to cover themselves and they want to cover you and all that kind of thing.

Paul Galea: Yeah, fair enough too. That’s really interesting, mate. And you’re connected with the film industry with the TV editing. That’s something that you like and want to pursue some time?

Jordan: I’ve been in TV for about 11 years and the intent originally was to do production, so to be either a director or a producer or a cinematographer. But I figured out that I really didn’t enjoy being on set that much.

I didn’t like the not knowing where I was going to be and for how long. That was a really frustrating aspect of working on set. So I was given an opportunity to, what’s called edit assist, which is basically, you assist the editors and kind of provide them with all the footage and I did that job, and I really enjoyed that.

I enjoyed the creative process of putting all the footage together, and that’s sort of what I do now. And I’m moving into actually making stories, which is great.

Paul Galea: Okay. I mean, then when you had a finite working day, you could then devote time to your writing?

Jordan: That’s exactly right. So you know, when you’re working on set and you leave at seven in the morning and sometimes you’re not back till eight at night. That doesn’t really give you a lot of brain space to work on a book.

Paul Galea: No, no, no. I can see exactly how that is. So we’re going back to school. Any particular happy memories or things that stand out from your time at school, if you can remember. 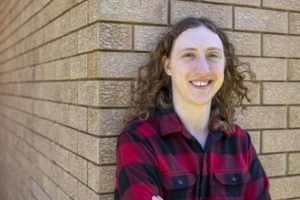 Jordan: Yeah. I don’t know how often you get this, but I actually really enjoyed my time at school. Every teenager sometimes gets all glum about being at school because, you know, you kind of feel like a bit like a prisoner, but for the most part, I actually had a really fun time at school.

The most striking memory, I think, is the fact that, unlike my friends who went to other schools, the teachers at IGS treated you like peers. They would talk to you like you were human beings rather than kind of talking to you, like you were kind of below them in some way. So that really fostered a nice relationship between the students and the teachers. And you always felt like you were being listened to so that kind of stands out really strongly for me.

Paul Galea: That’s an interesting observation, because I’m getting that basically from every person I have talked to. You know the two things that come out are dealing with different types of people you get, you learn to deal with a whole variety of different people.

And then the other thing is that relationship between teachers and students. I know you youngsters are not really keen on giving advice to our younger kids who are still at school, particularly the Years 11 and 12.

But I often find that what you guys tell them, they listen to, as opposed to when some old bloke like me tells them something. Have you got anything, any ideas that you might want to pass on?

Jordan: You know, even though I’m 34 this year, which is just monstrous to think about, I still feel like a kid in my head. But if I were to give anyone advice, it would be that your mark on the exams are not the end of your life. That’s the first part. At any point when you are studying at Uni or when you enter the workforce, you can just change jobs. You can. You can always change.

There’s no point where you are locked into the career that you decided on at 18 years old, that that’s all that you’re going to study at uni. So if you start studying law and you realise that you hate it and you don’t want to be a lawyer, that’s fine. You’re still young. It’s fine. You can just go do something else. So I think that that’s probably the most important thing.

Also, look for what you love. Obviously, I think everyone’s going to end up saying some variation of look for a thing that you really enjoy. But I think the most important part for me was learning that you can just take a hard right turn in your path and go, “I’m not going to do that anymore, I’m going to do something else.”

Paul Galea: Excellent. I couldn’t agree more. I’ve got some news for you, too. I’m 62 and I still feel like I’m 15 years old in my brain. Unfortunately, my body doesn’t quite agree with that.

Justin: You know, I get the very same thing from my dad because he looks in the mirror and says “Who’s this old man looking at me!”

Paul Galea: It’s hilarious. I’m with my friends and we talk about “Oh, look at those old guys over there”, and then we realise they’re our age or maybe even younger. It’s just crazy.

An absolute pleasure to talk to you Jordan. Say hello to your brother, Justin.

Paul Galea: He’s a good man, Justin. Always nice to catch up. And thank you very much, Jordan.

Jordan: My pleasure. Thank you so much for talking to me today, Paul.

Celebrating our IGS Class of 2022