Paul Galea: Hello, Grace Truman, Paul Galea from IGS here. How are you?

Grace: I am very well. How are you, Mr Galea?

Paul Galea: Well, you know, you’re allowed to call me Paul now, if you can get your head around that!

Paul Galea: So, Grace, you left fairly recently, but always you’ve been a person who has had plenty of things on the boil and been involved in a lot of different things. You want to tell us what you’ve been up to since you left school, but also when you were still at school.

Grace: Yeah. I graduated last year, and since leaving IGS, I’ve started a degree at UNSW, doing a double degree in Science and Arts, which is kind of combining two of my passions. I was very much into science at school, doing Biology, Chemistry and Physics towards the end of my time at school and also the arts have been another big passion of mine. Throughout High School, I’ve been working on lots of kinds of drama projects, particularly, and I performed last year in the school’s production of Much Ado About Nothing. And, of course, I have my experience with my family who work in the film and television industry and I have been producing a web series as well throughout High School. And that’s the other thing I’ve been working on since since graduating last year. I’ve been continuing that web series and I’m continuing to create new ideas for this web series. I’ve been writing new episodes for a final season of our series and, I’m hoping to bring those to life this year.

Paul Galea: Okay, so the web series. Can you tell us something about that; how it all started and the motivating factors behind it. A lot of people will know, but not everyone.

Grace: Yeah, sure. So the web series, I guess the impetus for it was really when my dad died when I was at the end of Year 5 in 2014. I was 10 at the time, and it totally rocked my world. It was so sudden. Mum and I had no warning. It was one day he woke up with a headache, and by the afternoon, basically he was gone, and I was terrified at that time because basically, the world as I knew it was not what it was anymore. But also, I was really scared because I quickly realised I was losing memories of my dad. It was only a few months after he died, and I already felt like I couldn’t feel his presence around. People had stopped talking about him. The reminders of him were kind of gone, and I just I couldn’t pull back those memories, and I was really scared to admit it. But I eventually told my mum, and we realised we needed to do something about it. So, as strange as it may sound, we decided the best way to keep those memories alive was to create a web series, because that’s what my family’s background is: working in the film and television industry. We we knew that world, and my dad was a script writer, and so his world was stories, so we thought the best way to honour him was to keep telling stories about him. So, through a kind of a process of development, we eventually came up with our series Graceful: Amazing Grace. The premise is basically each week I have a problem. I get stuck on something that I don’t know how to get through. And I imagine what my dad would say to me and the character of my dad appears, and he tells me stories. He makes me laugh, and it helps me find my own way to get through my problem. So that’s what the origin of the series is.

Paul Galea: That’s just a beautiful way to remember your dad. And one of the things I think which is just lovely about it, is that you’re interweaving it into your current life as you go along. I think that’s just great. And obviously it means a huge amount to you. And you just mentioned before that you’re looking to make the last series of the show. Is that correct?

Grace: Yes, yes, that is. So we finished our last series. We released it last year, and at that point we weren’t sure if we had any more stories. We were being asked, ‘Are you going to make any more episodes?’ We weren’t sure and then I got to the exam period I had last year. The HSC exams, the big exams. And I had a pretty rough trot of it, and we worked out that we had a story from there. So I have been writing, this year, new episodes based on my experience of that time. And we’re hoping these episodes will be a final wrap up of our series.

Paul Galea: Okay, that’s nice. Well, okay, I don’t know how to tell you this, but my children are older than you. The twins are 26 and my daughter’s 24 and I’m still solving all their problems, so you might have a few more stories in the future!! So one of the things that you need to do to make the last series is you need to fund it. Is that correct? And what’s the story there?

Grace: Yes. So all our episodes, because we’ve been working on this for years now, have been, usually crowdfunded, supported by the community. That has gotten us through so many times and for this series again, we are hoping to fund it with crowd funding. We hope to be able to shoot, in December this year, and because a production is such a big job it costs. It’s a big crew of people. And yeah, to realise this, these final stories of this series , we would love some community help.

Paul Galea: Okay, so we might be able to put some links at the end of the interview where people who are interested can look at what you’ve done and what you’re trying to do. They can go there and have a look and maybe see what we can get happening from that. Grace, you were Head Girl at IGS and you’re a young woman who was hugely involved in the school and in everything that the school had to offer, which was just wonderful to watch and how you developed as a young woman and in your work as Head Girl. But also just your work and your involvement as an everyday student. What I’m interested in is what do you think you got out of being a student at IGS that you can really put your finger on? That helped you to be the person you are.

Grace: Oh, wow. So much. That’s a big question. I think what I’ve noticed starting at uni this year, which I didn’t realise as I didn’t consider myself to be particularly brave or courageous, is that I realised that IGS kind of gave me the tools to be brave and to speak up and to share my opinion and to be brave enough to speak your mind. Because at university, it’s very different to school; they want you to discuss ideas. They want you to have a voice, and I feel like IGS gave me the tools, to have just that voice and to be able to speak my mind. 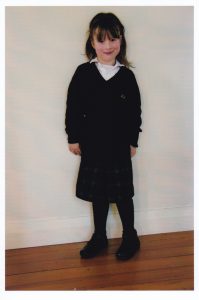 Paul Galea: Okay, that’s good. I mean, that, to me, is a very important thing. Again, I’ll revert back to my own children. Sometimes I think they’re a little bit too brave when they are giving their opinions! That’s an interesting take. The other question I always ask people is if you have got favourite memories of IGS? Things that really stood out for you; things you really enjoyed?

Grace: Yeah, look, this is going to sound probably very silly but I actually loved the end of class, not because the class was over, but because it was a time where I packed up my things really, really slowly. And it was a chance that I had to ask teachers one last question or to keep some bit of discussion going with my friends as we were leaving class. I don’t know. There’s just something really special about that time where you’ve got this connection with everyone around you. And you could just keep those conversations going. Yeah, I miss those conversations.

Paul Galea: That’s interesting, because that’s something that, I wouldn’t have thought of. I always used to be the last person to leave the classroom. Well, that’s what I tried to do most times. And when I think about it, I might have been doing that subconsciously because, you did have some interesting experiences in that last little bit, so you’re a very perceptive young woman.

Grace: Well, thank you. Well, look. Yeah, it was one of the things that was an everyday thing. It was just a special moment.

Paul Galea: Good. Okay, now, one last question. Any advice for people who are still at school, in year 11 and 12? Any things that you’ve learned in that last year or so that you think might be worthwhile them knowing.

Grace: Looking back at my last couple of years, I kind of want to shake myself a little bit. You’re told that you’re not going to be defined by whatever number you get in your ATAR and I think IGS is very good at making people realise that there is more beyond the HSC. But I kind of got the HSC, and the ATAR stuck in my head during that time. And so if I can give any advice, it’s to basically know that there is more beyond those exams. You are going to be a great person out the other side of it. No matter what, you’ll make it. And take breaks! Take study breaks! You need them! That time is worth every minute.

Paul Galea: Okay, good advice. I think one of the interesting things is when you’re on the other side of that big HSC road, you can look back with a lot more clarity than when you’re actually in it and even just a year outside obviously can see: ‘Well, it’s something which is huge. But is it actually as huge as I made it out to be?’ Well, that’s a good question. So good advice. Grace it was lovely to talk to you. We will look forward with anticipation to you raising those funds and making the last episodes of the series and look forward to seeing it, because it is an interesting, and I think just such a lovely way for you to remain connected to your dad, who obviously remains a super special person in your life. I think in terms of how you’ve gone about it, we’re going to look up to you. I, myself, was super impressed.

Grace: Thank you so much.