Congratulations to Year 10 Lucy Levenberg-Penklis who participated in Waterpolo Australia's NSW 16 and under girls team at the Interstate championships in Brisbane.

The team won gold and Lucy was awarded Most Valuable Player in the Under 16’s tournament. Following this incredible achievement, Lucy was invited to join the Australian Cadet Women’s squad.

“She is over the moon,” said her mother Jill.

Lucy said “It was a hard fought game”. 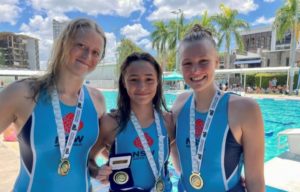 “At three-quarter time, the Maroon’s were down 9 to 5, only to fight their way back to 9 to 9 with a couple of minutes left to play. A tactical goal in the last minute secured the win for us, which felt amazing,” Lucy said.

“It felt fabulous to represent NSW and it felt even better to win gold, and the icing on the cake was being named Most Valuable Player in the U16s girls tournament.”

“I was also named in the Australian Women’s Cadet squad, along with two of my team mates from Sydney University. Unfortunately, a five-day training camp for the squad was cut short because of COVID, but another training camp is planned for April. Following this camp, a team will be selected to compete in the first ever U16 World Youth Championships in Volos, Greece.”