Congratulations to our IGS XI Football team who displayed skill, determination and teamwork at the St Andrews Cup.

Head of PDHPE Sport and Outdoor Education Simon Board said IGS players have cemented themselves as a force in school football.

“More importantly, the bonds created between players and coaches alike continue to strengthen the IGS community through every powerful run, well-timed defensive read, remarkable save or structured play,” he said.

“What a day of football for IGS!” said Mr Board. 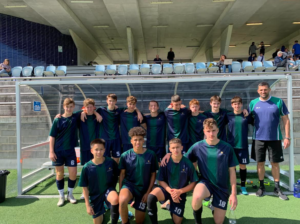 “The defence, led by the captain Luca, was rock solid, with Archie and Hugo shutting down any attacks. Lucas with his massive boot and combination of exceptional skill and speed was a constant threat both in defence and attack,” said Mr Board.

“Leo was brilliant out wide with strong runs and excellent crosses. Perhaps the play of the day was a run down the sideline from Leo, which culminated in the perfect cross to a full stretch Tyrone, who managed somehow a faint touch to only to see the ball slip wide of the goals.

“Goalkeeper Will was incredible not only to keep a clean sheet but also in the way he inspired the team through his confident defensive positioning and rock solid performance at the back with some high quality saves.” 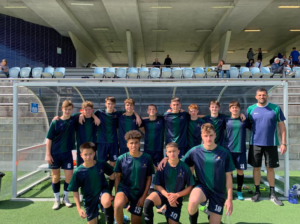 Simon congratulated the younger players who “imposed themselves amongst the significantly older opposition”.

Well done to Marli, who Simon described as “skillful and fearless” and Will, who was “ever confident, strong and agile”.

Well done to all involved. The St Andrews Cup will be held as an annual event for IGS players.