Julia Glass: Hi, Paul. Well, thanks. How are you going?

Paul Galea: Not too bad. So you’ve made the mistake of accepting my invitation to do an interview. I’m just going to let our listeners and readers know who you are. Just a very short summary. You were a student at IGS, a very well liked student. You then became an aftercare worker and then you went away overseas, pursuing your cello and your French language. And then you came back to IGS as the Director of Advancement for a few years and stayed in that job for quite a while, had a break and then came back to it until you were replaced by the strange man who’s now doing the job. Tell us what you’re doing now and the journey you took to get to where we are today.

Julia Glass: Thanks, Paul. So I’m currently pursuing a dream to do floristry.  I am a full time florist. I’m working creating floral designs for weddings, events and all sorts of gift arrangements. I’m also working for other florists to gain more experience in weddings and events. Before that path, you’re right. I was at IGS as a pupil. And then I went on to study a Bachelor of Music Studies at the Conservatory of Music with the cello and then worked in the arts for a number of years. I started in the Sydney Philharmonic Choirs before travelling over to Paris. I always wanted to live and work overseas. Having that edge of having the language from IGS was really great to be able to set myself up in a foreign speaking country and in making the decision to move and work in Paris.

Paul Galea: Just explain that experience, not only just doing it, but also the decision to do it because I think a lot of our people think about these things and then don’t actually go through with them. I’m just interested in your thought processes and how you actually made that move to get to Paris. It’s a big step.

Julia Glass: Yes, I was definitely someone who loves my home and loved my family. So it wasn’t that I wanted to run away from anything. It was more just wanting that sense of adventure. I had been overseas before on a Contiki tour and a few other travels that I’d made. I thought, “Oh, well, you know, why not make take the plunge and just have a year or two, maybe in London,” and then I thought, “well, hang on, I can speak French.” I wouldn’t say I was extremely confident in French, even though I had studied it. It’s always that thing.

When you get there, you really get confident because you’re listening to the radio, the TV, speaking in French all the time. I lacked a bit of confidence, but I thought, “No, I’m going to do this.“ I arrived in London for a little while and then went across to Paris, and it was really hard. For the first six months, I was quite lonely. But then I ended up working as an English second language teacher and made a lot of expat friends and then started, to enjoy it. I had a French flatmate at the time, so I was able to speak French a lot. And then I eventually got a bilingual job in English and French at the Australian Embassy, working as an assistant, which was what I had aspired to. That was amazing and it was just amazing how I still have all that language. It’s sort of embedded.

I feel now that I’ve lived that experience, it’s really nice to be able to look back on. I’m a bit slower in the French, but it’s nice when, for example, French teachers or kids come and have a conversation and that’s nice to be able to reply in French. Yes, I would definitely recommend a sojourn overseas. It’s just really confidence building and eye opening. And it doesn’t really matter what you do over there.

Eventually the pull was back here because I missed my family and missed the beautiful weather. Funnily enough, my brother went away, and now he’s living in Portugal with his family. I came back to arts roles again and I worked for the Australian Chamber Orchestra and the Sydney Symphony Orchestras. I was always working in the arts, not playing in the orchestra, but working behind the scenes in the administrative areas in sponsorship and fundraising areas. I always loved going to the Concert Hall or to City Recital Hall to hear the orchestras play. But then the opportunity came up for the first ever alumni officer role at IGS, and I just thought it was so exciting to be able to start something up and something that had not been done in the past. In some way, there had been FIGS (former IGS students) and there had been a student association but to just bring it all together and formalise it was really exciting. And it was so nice to be welcomed back into the community and to see Mr Miller, yourself and Ms Morabito and lots of teachers that I’d had. 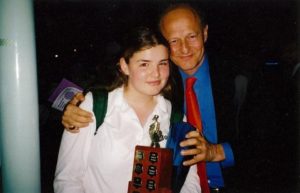 Paul Galea: All the work you did in the early days with the alumni, set the bedrock for what I’m doing now. And for that, I thank you. I also had the benefit of going to quite a few of the reunions that you organised. I found that extremely gratifying. To see the way that our kids have grown into really nice young people. Is that something that you also saw? And did you think that there was that very positive aspect to the job you were doing?

Julia Glass: Yeah, exactly. Everyone was pretty happy to be contacted. And it was exciting to see what everyone was up to in the amazing careers people had and just experiences they’ve had. And it was also amazing to see how many alumni want to come back and work in after care and teach at IGS.

It’s a real testament to the positivity of the school and even my brother, who had an experience at a school before IGS that wasn’t amazing, said that Years 11 and 12 at IGS, really put him on the right path and on his way. He told me that he felt like an equal, and he felt like teachers respected him, and I think that was a big thing.

There is a mutual respect between teachers and students. You really felt that at IGS. Even if you weren’t top of the class, you still get treated well. It’s not just “Oh, you’re a favourite, because you’re achieving 100 per cent.” It’s like everyone is respected for their strength and abilities, which is really lovely. And I love seeing, actually, all of our alumni who are doing really interesting artistic things and academic things, too. So it’s really lovely to see the breadth of all the alumni. What they end up doing.

Paul Galea: Yeah, well, that’s one of the things I have found. The breadth of what IGS people do is amazing. Scientists to authors, to producers on TV to psychologists. It’s very interesting. Okay. Now, speaking of interesting , give us a bit of information about becoming a florist, because that is a little bit out of left field from what you were doing.

Julia Glass: My mother was a florist in the nineties, and so I think I had always had it in my blood in some ways. And then I always loved creativity. I guess that playing the cello is linked to that as well. And I just always loved beautiful colours and experiences. And so I went off and studied the Certificate 3, which I think a couple of other alumni have studied as well. And it was a really enjoyable course. Then, I was asked to do some bridesmaid bouquets and then started my own business off the back of that. And I think it actually goes back to being interested in that start up culture, which was sort of like at IGS with starting up of the alumni official programme. I find it really gratifying to make something your own and you make it better.

Paul Galea: You better give your company a plug, Julia!

Julia Glass: So it’s “Flowers by Julia G”. I’m very proud of our eco focus. We recycle our green waste and wrap bouquets in compostable packaging and try to be as sustainable as possible. So you can find us on Instagram and Facebook – Flowers by Julia G.

Paul Galea: Okay, that’s enough. Free plugs will be getting me in trouble! I always ask: your favourite memories from school? 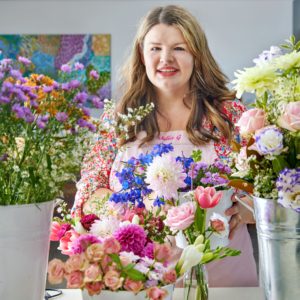 Julia Glass: Oh, yeah, that’s a good question. I did go on the infamous history tour to France and Turkey in Year 10, which was just an incredible experience for a 15 year old to be travelling the world with classmates and teachers and learning first hand about World War 1 and World War 2 . Also, I think just having a really small music class in Year 12, where there were only three of us doing Music 2 and we got to play some really nice concerts together for our families. I just think having those small class sizes was really special. You really got to bond with your teachers. I’m looking forward to opening our 20 year reunion Time Capsule, which should be next year, actually. Someone was telling me the other day that it’s down in the basement. So I’m also looking forward to hopefully catching up with the class of 2003 in 2023.

Paul Galea: We might both have to go and have a look for that time capsule! I know you know, this is something which people your age don’t want to do. But have you got any advice or words of wisdom for our students, especially our older students, that you might want to impart?

Julia Glass: Well, it’s lovely to be asked that question. I think just to be open to learning in all sorts of ways. So if you’re studying music, go to lots of concerts at the Sydney Opera House. And if you’re studying art, go to the art gallery and visit museums and galleries. Just be really open to the world. And it’s because that’s what awaits you. And it’s really exciting after you finish school, the endless possibilities out there.

Paul Galea: Julia, it’s been lovely to talk to you. I’ll look forward to next year when you and I are searching through the dusty basement looking for the 2023 Time Capsule!

Paul Galea: Yeah, well, that’s a long way away. We don’t talk about that just yet!

Julia Glass: You have a good day. Bye.

Paul Dillon speaks out on vaping