Year 9 Science students have been exploring space research technology as part of their Term 1 Assessment Task.

Students were tasked with selecting an example of space exploration technology and turning their research into an informative A2 poster.

“I felt in charge of my project and enjoyed this assessment task,” Sacha said. 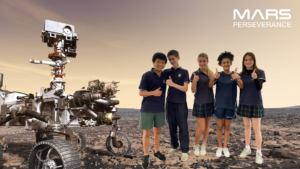 IGS Head Girl and Science student Grace Truman said how excited she was to see Year 9 Science students “engaging with the extraordinary technologies at one of the frontiers of scientific discovery, and following and developing their own interests in STEM”.

“With the recent landing of the Perseverance Rover on Mars, learning about space exploration is more topical than ever,” Grace said.

“The Perseverance Rover is the ninth spacecraft to successfully land on Mars, a notoriously difficult task dubbed the ‘seven minutes of terror’, because of the thin Mars atmosphere. The rover is equipped with cameras and improved computing abilities, that gives the rover the ability to ‘think while driving’.

“This computing capacity gives Perseverance far greater autonomy than previous rovers, which have required instructions from Earth before they could proceed with any movement. Perseverance’s mission is to collect samples from the Jezero crater where it landed, which once contained liquid, in search of signs of previous life forms.” 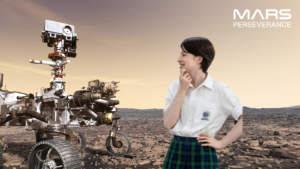