Year 3 Japanese students are learning about Australia during Term 1.

Assistant Head of Junior School Languages and Japanese Teacher Machiko Ohta said the students’ learning journey began with familiarising themselves with a map of Australia, where they identified names of states and cities.

“Then they learned the symbols of our State flags. The students learned that the symbols and colours of our flags have meaning and they portray who we are to the rest of the world,” Machiko said.

“The students enjoyed the task of making a new national flag of Australia. Some students designed one with a
koala and kangaroo, while some drew vegemite. 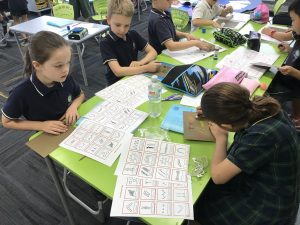 “Their learning journey continued with the exploration of Aboriginal symbols. First students identified that we all use different writing systems in the world. In Australia, alphabets are used to write, while in Japan Hiragana, Katakana, Kanji and some alphabets are used.”

To finish off their lesson, students enjoyed writing a message using Aboriginal symbols, and some even wrote a short story.

Hard work pays off for Hanu