Year 3 Japanese students have been exploring what it would be like to to travel to Japan.

Their teacher Machiko Sensei said their learning journey began with understanding the map of Japan.

Students prepared for their journey by discussing what they would take on their trip. They explored famous landmarks, activities and what transport they would use to get to each location.

Students enjoyed hearing other students’ stories from their recent trips to Japan.

“Our travel continued as we learnt about sports and leisure activities in Japan,” she said.

“The students were fascinated by the different types of sports in Japan. They particularly enjoyed watching videos of sports games and competitions. Of course, Sumo was one of their favourite sports to watch.

“In class the students had an opportunity to play a game of sumo wrestling. It was a bit different from what we watched in class but called ‘kamizumo’ which literally means paper sumo. 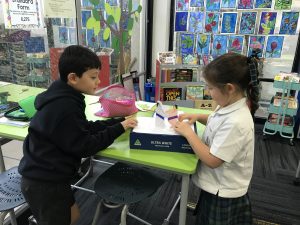 Before playing kamizumo, the students learned some expressions often used during the match.

“After colouring their own sumo wrestler they enjoyed playing the game in small groups,” she said.

“The students loved the activity.”