Year 1 language students enjoyed participating in a day of fun activities to consolidate their learning on the last week of Term 3. 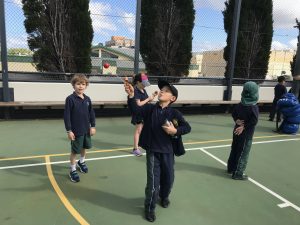 “The students were introduced to a variety of traditional Japanese toys such as kendama, otedama and hanetsuki,” Machiko Sensei said.

“They were encouraged to pay extra attention as they listened to instructions given in Japanese.

“In small groups they were excited to show each other what tricks they can with otedama and kendama and how many times they can toss the hane with hanetsuki.”

“The students couldn’t stop laughing while watching their teachers try to run fast in the demonstration,” she said.

“They cheered their peers as they played the game, singing the Italian song.”

Encouraging students to be the best learner and friend