“My sculpture Erosion is a collection and representation of the human body and its delicacy, as well as a focus on humanity’s slow decay, abnormalities, and ultimately death,” said Maximus.

“My body of work includes various intricate bones such as the jaw, femur, ribs, arm, shoulder, pelvis and eye socket with a facial structure. Originally, the idea of my skeletal pieces was to be as anatomically correct as possible, however as I created and shaped my works, I began to vary the proportions, conveying both human and inhuman, monstrous beings.

“I used paper clay, which is very malleable, while white vinegar created cracks and ageing of the bones, alluding to the idea of immense decay and disintegration over time. The fragility of the lonely, ravaged and disconnected pieces assists the aesthetic largely, as one small incorrect movement can cause fracture.” 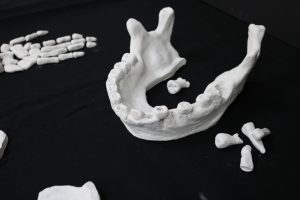 Road to success in languages