Therese competed against 17 students from other schools, sharing her Chinese language and culture skills through a speech and a demonstration of talent.

Students participating had to prepare a speech in Mandarin on the subject One World, One Family, as well as put together a cultural performance which could be in the form of anything from singing, playing a musical instrument or writing calligraphy.

In her speech, Therese spoke of the challenges the world faces, including climate change.

“Because of this, we all need to leave our differences behind and unite as one world and one family in order to realise a better future,” Therese said.

“For my cultural piece, I performed a poem called 面朝大海春暖花开，which means Facing the Sea, With Spring Blossoms. It is an emotive, moving poem that describes the simple yet tranquil and happy life that the poet longs for. 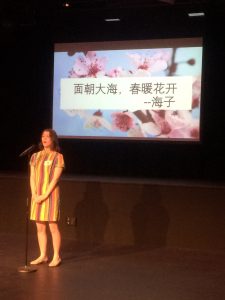 “I really enjoyed performing and I feel that I learnt a lot while preparing my speech and poem. It was an amazing feeling to receive an award, and the day as a whole was a fantastic experience.”

Chinese Teacher Shuyi Wu said there were a lot of high quality performances and said some students’ proficiency was really impressive.

She said Therese gave a “powerful speech and recited a Chinese poem”.

“Although Therese didn’t win the top three prizes, she did a fantastic job,” she said.

All smiles at ASSISA netball