The festive season came early for Kindergarten with a gift from IGS Principal Shauna Colnan.

Beside the tall Bibliothèque Christmas tree, each child received an IGS teddy bear, in recognition of their first year of learning at school, through the IGS Off-Campus Learning Program and in their classrooms.

The children’s faces lit up as they met, named and hugged their bears, then listened to Ms Colnan recite a poem she’d written.

MY IGS TEDDY BEAR
from Ms Colnan
for Kindergarten

My IGS teddy bear came to me one
bright and sunny day.
He was made of wool.
His eyes were kind.
All he wanted was to play.

I took him out of his paper bag.
I cuddled him close to my heart.
I held his hand and patted his head
and promised we’d never part.

And now my teddy and I are close.
On that you can depend.
We’ve been together from the very start
and we’ll always be best friends.

The children discussed how they preferred learning at school with their friends and teachers, and how the new bears could make friends with their other soft toys. 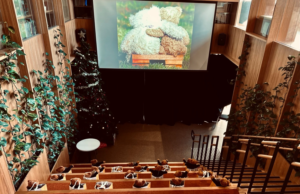