Taking a stand against violence

IGS Year 12 Legal Studies students welcomed a case worker via Zoom to discuss complexities of Domestic Violence (DV) on the National Day of Action Against Bullying and Violence.

The case worker was from Non Government Organisation (NGO) day time crisis and drop-in centre Lou’s Place, to which the IGS community donated goods as part of our International Women’s Day response.

She explained that the centre has about 300 active clients and sees 20 women at a time, and up to 60 a day, providing meals, a hot shower, support and advocacy, including with government departments.

She shared a case study which illustrated the complexities of each case, adding that her role was not to enforce the solutions on clients, but to empower and support them, present options and help create plans based on their own decisions. 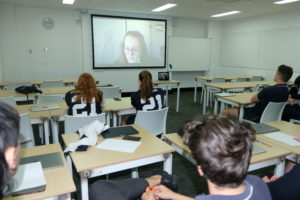 Violence was not only physical, financial and emotional, but included isolating a person and having power and control over them and their lives.

“The abusive relationship may be long standing and intense, chipping away at their self worth,” she said. “Our role is about helping them see that they are more than their toxic relationship.

“You follow their leads, they are the experts on their lives. You provide resources and options. They have protected themselves up to this point…

“It’s not always about economic status. We have women across the board, women who have been CEOs of a company who can no longer work because they have been so severely beaten.”

She said gender stereotyping was one of the factors which led to DV, with some men raised to be strong and not show emotions.

Meg of Year 12 said she was grateful for the opportunity to hear from the case worker.

“I think it was amazing,” she said. “We are such lucky kids to be able to have access to the means to chat to someone so influential and relevant to the DV topic. It was really impactful to see her optimism.”

In related news, tutor groups discussed the National Day of Action Against Bullying and Violence, with a number of students wearing “take a stand” wristbands.

Jack: If anyone ever puts you down about something, use that to motivate you.

Aisling: Bullying is not okay and it can destroy a young person’s life and stick with them for a long time.

Zoe: Don’t be a bystander. Stick up for yourself, and stick up for others.

Pet of the Week feature

Italian delights got a big thumbs up