A neighbour, in the Mountain Street Fusion Building, is a game development studio founded by IGS parent Ashley Ringrose of SMG studios.

His visionary space is called “Game Plus” – a gaming, mini-mecca, and creative hub which hosts multiple video game development companies and start ups. 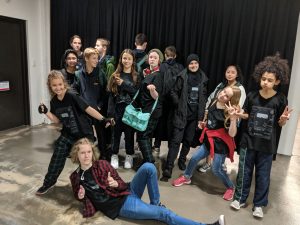 “After the students walked through the lobby that looks a bit like a mini-golf range, they were shown to the ‘Hoj’ or Hall of Justice,” Graham said.

“This  is a boardroom with a timber, inlaid, boardroom table that doubles as a ping pong table. Here Brayden presented on what makes a good game and what to watch for as quality testers.

“Ryan from Chaos Theory Studio also joined the students with some of their works that are in early stages of development.

“The students’ feedback is a crucial part of development and provided our budding innovators with an amazing look behind the curtain into what it takes to produce quality, commercial games.” 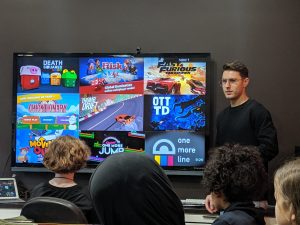 Students found bugs, “broke” programs, overloaded game servers and poked holes in story lines, all in the name of quality.

As a development exercise student also got to pitch new ideas and design maps as a part of rethinking the next phases of the classic board-game-turned-video-game “Risk” a product of SMG.

Graham said the students had the chance to brainstorm and map out our ideas, just as professional designers would.

“Students had fun and did some immense learning and intense playing. Collaborative innovation was the order of the day. Students learned the hours that go into seeing a game through; concept, pre-production, production and post production,” he said. 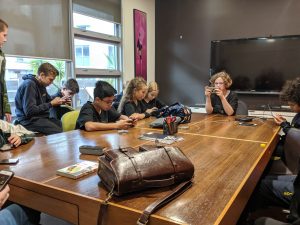 “By the end of the day the students all had rectangular eyes and were exhausted by a surprisingly rigorous routine of living the dream in the life of a full-time game tester.

“Two of the students asked when they would be eligible to apply for their new jobs!”