Student stands up for the future

Grace has been featured in a Penguin 2019 publication that celebrates a range of young Australians, Stand up for the Future.

Several copies in the IGS Bibliothèque have remained in strong demand, with students having to reserve ahead to read it.

“I have absolutely no idea how I was chosen to be featured,” Grace said. “I didn’t know anything about the book until after it was published and our IGS librarian showed me a copy.”

Grace was then asked to sign copies at the Hill of Content Bookshop in Balmain last year (see below). 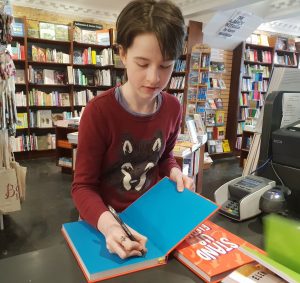 “Most people who have seen the book are impressed, surprised and complimentary,” she said.

“I am astonished and humbled to be among such incredible, inspiring talented young Australians.

“It is good to know all royalties from the sale of the book go to the Smith Family.”

Grace, an actor, is an ambassador for Fly High Billie and creates a regular series of amazing Grace videos charting how she deals with issues following the death of her father several years ago.