Students are up to their vocal chords in ‘Grease’ as they prepare to bring the much loved cult classic to the stage, as sponsorship opportunities open up for the production.

Musical Director Nikolas Glass said Act 1 is officially complete and he has now begun teaching the cast their lines for Act 2.

Classes earlier this week started off with some breathing exercises, before getting straight into the big opening song of Act 2, Shakin it at the High School Hop. 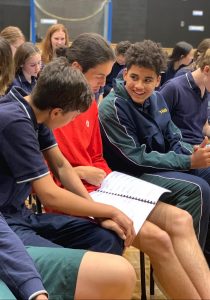 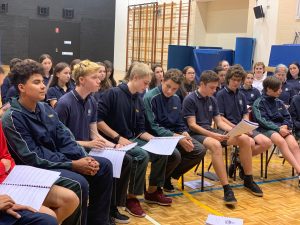 He said one of the most unique parts of the show is the fully immersive experience he has in store for the audience.

They will feel as though they are a part of that space and “will actively be involved in various scenes,” Nikolas said.

“The cast have been trained to engage and interact with audience members.

“The kids will be dancing the Hand Jive and will be getting the audience members to do the same.” 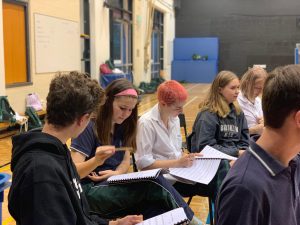 Another exciting part of the production is the transformation of the school hall, which will turn into the Rydell High Gymnasium.

It will even feature a big disco ball.

Ahead of the performances in July, parents and caregivers are invited to promote their businesses by supporting the production. Four tiers of sponsorship packages are on offer, ranging from $350 to $5,000.

Please view details or email Director of Advancement Julia Glass at juliag@igssyd.nsw.edu.au of phone 9219 6778 to discuss.

“At the start of Act 2, cast members will literally be setting up decorations for their big prom and they will be getting audience members to help them with that as well,” he said.

Nikolas said the audience can expect all the big hits including, Look at me I’m Sandra Dee, Grease is the Word, Summer Nights, You’re the one that I want and Hand Jive.

“They are the memorable ones, then there are other songs that are not part of the movie but are part of the stage production, Mooning, High School Hop, Raining on Prom Night,” he said.

“These are really great dramatic songs that form part of the story line and the character development and also provide a beautiful diversity.

“It’s a bit of an eye opener for people who come and see the production. People think they are coming to see the movie on stage, but it’s actually very different to the movie.”

A committed cast and crew

Mr Glass said he is really enjoying working with the cast, who are made up of students in Years 7 to 11 and is appropriate for older students, due to the themes.

“Being a part of this show involves giving up some of their spare time,” he said.

“The kids are really committed and focused, they understand they are part of something really special.”

Global Learning Experiences at a glance