Parents and caregivers enjoyed the talents of IGS musicians at our recent Music Ensemble Concert.

It was a fabulous display of ability and enthusiasm as students from seven ensembles shared their love of music, led by our creative, dedicated and experienced IGS Music educators.

Bands Coordinator Sarah Butler: “The concert was a significant milestone for each concert band as every ensemble achieved the highest level possible. As every year passes, the loyalty to the band program and enthusiasm shown by students and parents continues to forge into IGS advancing as a leader in the Concert Band world.

“Music staff regularly attend and participate in workshops in topics such as, advancing techniques in conducting and repertoire selection. These workshops provide invaluable support to staff and students.

“Thank you to all the families involved in the Band program for all their support. Your commitment to early mornings and music lessons does not go unnoticed, and events like last night serve to confirm the creativity and musicality of our students.”

Music Educator Sarah Travis: “It was thrilling for the Training Band members to hear the High School students perform such wonderful and exciting repertoire.

“They nearly jumped out of their seats with excitement when the Senior Orchestra played their bold opening chords.

“Some of the students conducted, others were wide eyed with wonder, some were straining to see the musicians and others sat there mesmerised.”

In further Music news Ms Butler, as Vice President of The Australian Band and Orchestra Directors Association, co-hosted the National Band president from Japan with the Sydney Conservatorium of Music.

“Connecting with and understanding other successful programs from all over the world has impacted IGS students massively, to allow them to be at the cutting edge of repertoire and performance techniques,” she said.

“Later this Term Michele Ellis and I are co-hosting a teacher workshop for band directors run by the Orff association and ABODA NSW.” 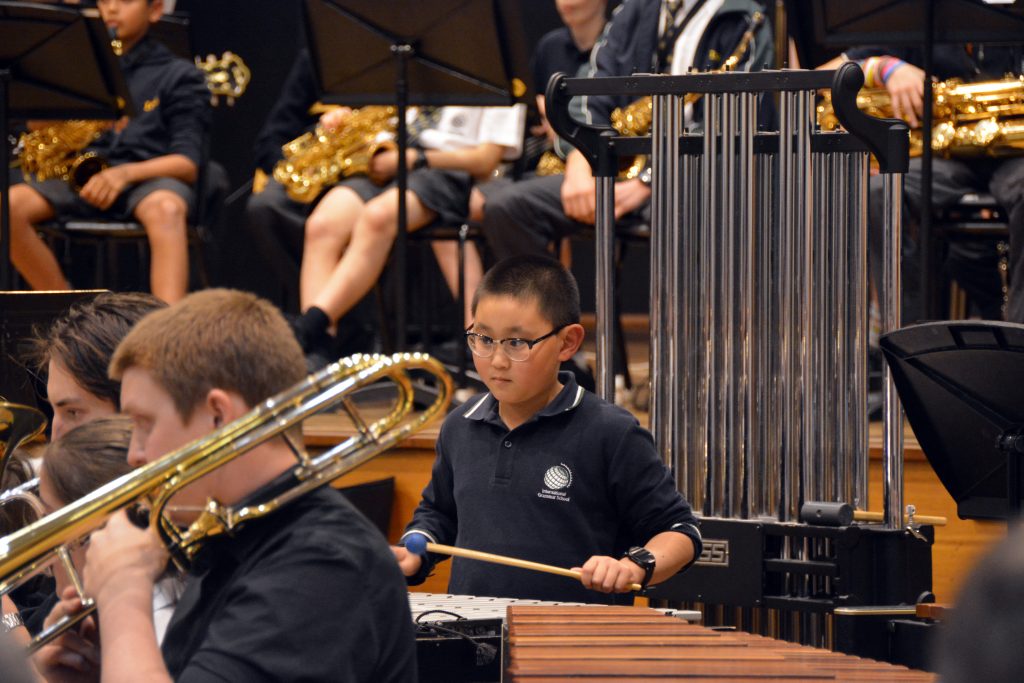 Senior Orchestra: Warrior Legacy by Soon Hee Newbold and Dance of the Tumblers (from Snow Maiden) by Rimsky-Korsakov

Symphonic Winds: Phantom of The Dark Hollow by Robert Sheldon