Thank you and congratulations to everyone who contributed an IGS Pet of the Week for us to feature!

This week we congratulate Lola the Turtle, Ginger, and Pumpkin the guinea pigs and foster kittens who have been given a second chance at life.

“Their favourite thing to do is to eat kale and explore,” said Chiara. “They are unique because they are adorable and nice to cuddle with.” 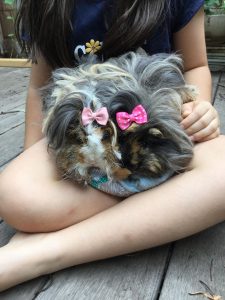 Alice of Year 5 and Edward of Year 1 love their turtle Lola, who is 13 years old.

“She loves to eat crickets and loves to have her chin tickled. She’s unique because her front flippers didn’t rotate properly when she hatched so they turn backward which means climbing is a bit of a challenge- but she doesn’t let it stop her,” they said.

Neo in Preschool Green said he loves fostering kittens “because it gives them a second chance for a happily ever after in a ‘furever’ home.”

“They are the most playful, funny, adorable things, they constantly try to catch us as we walk down the corridor and have races with Neo’s cars and roll on top of each other,” Neo’s mother said.

“The sweetest though, is when they curl up in the crook of our necks for a nap.”