Students in the Year 8 lunch time Mafia Club enjoy meeting their friends to protect or "betray" each other in this alternate reality knock-out social game.

The popular party game with many variations is said to have originated in the USSR in the 1980s, and can be played with cards, an app, or just players’ knowledge.

Logic, strategy and social skills such as reading body language are involved. 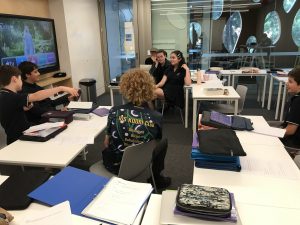 In each round, players nominate who they think are “the mafia”. If correct, the game is over, and the majority win. But if not, the game continues until the identity of “the mafia” is either revealed or they are the last player or players standing.

Isabel: It’s a complicated game. There’s one evil person and everyone has to work out who it is.

Antigone: You can play it with technology or with nothing or with cards.

Karam: You try to keep your identity hidden.

Hunter: It’s mainly a group where we can meet up with our friends and play.

The group can play up to 20 rounds in an hour.