Millie Lamshed: Racism within the AFL: A focus on Eddie Betts through acrylic artwork

Through her Major Work, Millie Lamshed explored racism within the AFL and the wider community.

Millie chose Aboriginal Studies after realising she had no knowledge of the Aboriginal perspective, and was only taught the white Australian and British perspective.

“I also support many sports involving Indigenous athletes, and have witnessed and seen countless acts of racism towards them and felt very strong about it,” she said.

“I have enjoyed learning the area around stereotypes and the true reason why these thoughts have been formed. I enjoyed this, as now I have the knowledge to educate people who dwell upon these stereotypes.”

“My portrait has aimed to reflect the impact that racism can have on a person,” she said. 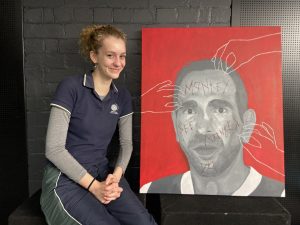 “I used black and white for the skin tones for two reasons, to remove the focus on race, and also to give a feeling of history, that racism against Indigenous Australians has been around for a long, long time and still exists.

“Standing out against the black and white are the shocking blood red words ‘monkey see monkey do,’ seemingly carved into his skin.

“This horrible phrase was directed at Betts by an individual who commented on Betts’s Instagram page. These words are represented as cuts to his skin to emphasise how racism towards an individual goes deep and scars for life, attacking their confidence, their Indigenous identity and their family heritage.

“White hands representing the AFL have been sewed on with cotton string, to emphasise a belief among non-Indigenous that these wounds can just be fixed, or ‘stitched’ with an apology. The hands are shown holding sewing needles, yet not quite reaching the wounds, conveying that the AFL is improving, slowly changing their mindset and exploring alternate ways to protect their Indigenous players through various programs and initiatives.”

Millie said Eddie Betts is her absolute favourite AFL player, and through the years of following him on social media, she has seen countless posts where he addresses acts of racism.

“This in particular inspired me to explore racism within the AFL and the wider community.”

Staff thanks, farewells and congratulations