Sammy had a blast joining in on his science experiment from Google hangouts last week.

Sammy and his class were tasked with creating sherbet last week.

“It was really fun, because I got see my class and my friends,” Sammy said.

Sammy’s mother thanked his teacher for “engaging him so beautifully in the class, and the kids were talking to him, too”. 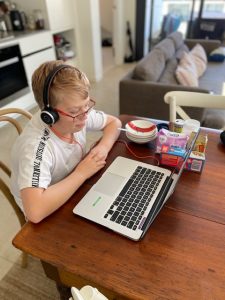 “Stuart had sent the ingredients and method for sherbet the day before, so we had all the things Sammy needed,” Annette said.

“He stayed on the hangout during the class, working on his Kahoot quiz as the others did.”

Annette said she appreciated the extra efforts being made to engage Sammy.

Sammy said the best thing about learning from home was being about to spend time with his mum and his dog.

“I liked calling into Tutor Group the best,” Sammy said. “I talked to them in the morning and that was the best. We told jokes to each other and did some funny dares.  I miss seeing my friends at school so I like talking to them on video calls.”

We miss you, too, Sammy, and we wish you and your classmates and all your families all the best.