Lest We Forget: An ANZAC Day Remembrance Assembly

An emotional ANZAC Day Remembrance assembly reminded students of the value of courage, dignity and grace in adversity.

The IGS Symphonic Winds Ensemble set the mood with a rendition of Down Wilderness Road by David Marlatt. 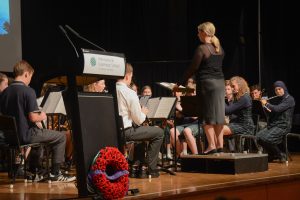 Principal Shauna Colnan shared the inspiring story of John Simpson Kirkpatrick, who at 22 years of age, “headed out into the grey dawn of the vast expanse of the Indian Ocean with the first contingent of the Australian infantry force,” Ms Colnan said.

She said his story was one of grace under fire and of courage against all odds.

“Such a sad story of a young man of enormous heart and potential, cut down in the prime of his life on the fatal shores of Gallipoli,” Ms Colnan said.

At 18, he arrived in Australia from England after jumping ship in Newcastle and, with the outbreak of war, joined up under the name of John Simpson, nicknamed Jack.

The “strapping young man” became a stretcher bearer after landing at Gallipoli on 25 April, quickly making a name for himself among his comrades for his fearless rescues of the wounded men with the help of a donkey.

“The ANZAC’s bravery was beyond doubt as they clung to the cliff edge by their fingernails under an endless barrage of Turkish fire, the horror unimaginable, the casualties devastating,” Ms Colnan said.

Just three weeks later, Simpson was killed while helping the wounded, one of 60,000 Australians and 17,000 New Zealanders who lost their lives in the Great War, yet more than 100 years on, the story still resonates.

“It’s because Simpson and his donkey exemplify the concept of individual courage when there is nothing else,” she said.

“It’s a story of dignity and grace. Put to the test, could any one of us act with the fearless courage, the purity of heart and the selflessness that we see in John Simpson Kirkpatrick?

“The story of Simpson inspires as a beacon of goodness and peace in one of our nation’s most harrowing experiences.”

Head Boy Fadi Al Hatu said Simpson’s story exemplified what was best about young people, regardless of the time and place, caused him to reflect on how he came to inspire the whole nation.

“He was optimistic, confident, full of hopes and aspiration, with a strong sense of what it means to be a true friend, strong and just,” Fadi said, adding that there was no place in Australia too small for an ANZAC memorial.

Head Girl Siena Scott-Hickie said it must have initially seemed like a great heroic adventure, but that “nothing in their lives at home could have prepared them for what awaited them”.

Even so, in their letters home, they protected their families from the grim realities. Siena said she had learned from reading letters of nurses serving on hospital ships ferrying the wounded to the Greek Islands just how hopeless their situation had been, with at least several dying each night from horrific injuries.

She said those who returned from the war deserved our respect as much as those who did not, for they didn’t use their experiences to become cynical, bitter and resentful.

“They spared their loved ones from the terrible things they lived through,” Siena said.

Head of Humanities David Miller said the sacrifices of the ANZACs created the Australia we cherish, where the values of “a fair go and the right to choose to live your life how you like, to express your values without being subjected to intolerance”.

“We remember them and honour their memory,” David said. “They remind us to approach life’s challenges with restraint, respect and good humour.”

Shakespeare comes to life at IGS