Kindergarten students of Japanese invited their parents and caregivers to a special concert to celebrate their effort and achievement in Japanese class this year.

“As this year is the year of Indigenous languages, I wanted to take this opportunity for a special fundraising event to support one of our local Aboriginal preschools, Wunanbiri Preschool,” IGS Japanese Teacher Machiko Sensei said.

The concert started with one of the students’ favourite songs, days of the week song, followed by their self-introduction.

They confidently introduced their name, age and what they like as they showed a picture they’d drawn. 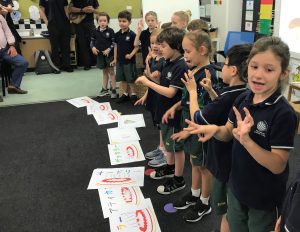 “The highlight of the concert was when the students became a little sensei and taught their parents, caregivers and Year 10 students who came to watch the concert body parts in Japanese.

“We concluded our concert with singing あたま、かた、ひざ、あし(head, shoulders, knees and toes) in Japanese with everyone.