Kindergarten thrilled with the ‘magic’ of science

She introduced them to science equipment, including the microscope, telescope, ottoscope (for ears), lab coat, safety glasses, disposable gloves, beakers, pipettes and more.

“You have to make sure you practise safe science.” 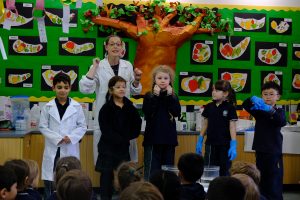 Liquids changed colours and frothed and bubbled before their eyes, introducing them to the concepts of bases, alkalis and indicators.

Students then considered how to create toothpaste for an elephant. 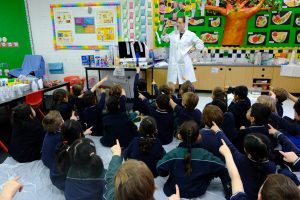 Volunteers used glow-in-the-dark toothpaste on a range of toy models, and then shrieked with excitement as Mrs Sharma created a spectacular giant foaming beaker of blue froth, or “big toothpaste”, using a combination of strong hydrogen peroxide bleach, detergent and food colouring. 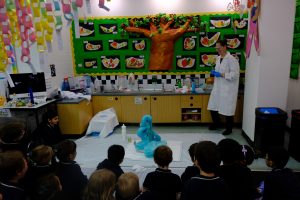 They then explored chromatography, using their own piece of filter paper, adding two coloured dots and then adding water to a cup with pipettes to see what happened.

“We love science!” the students chorused, thanking their visiting scientist.

Big smiles as Kindergarten and Year 1 take part in carnival

A celebration of spring