IGS had the honour of welcoming high-profile international educator Pasi Sahlberg to the High School end of term assembly this week.

Professor Sahlberg has worked as a schoolteacher, teacher educator, researcher, and policy adviser in Finland and has studied education systems, analysed education policies, and advised on education reforms around the world.

After relocating to Australia, Pasi is now Professor of education policy at the Gonski Institute for Education at UNSW.

IGS Principal Shauna Colnan said she was fortunate to be one of 60 educators from around the world who had the opportunity to learn from Pasi at Harvard’s think-tank on global education in 2014, where she was “inspired by his cut through messages about the importance and value of teachers, about student learning and about schools, ideas that underpin Finland’s extraordinary educations system”.

“It is an absolute thrill to have him here with us,” Ms Colnan said. 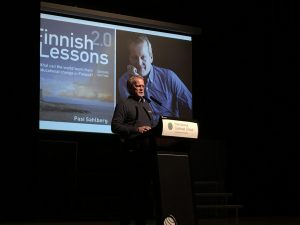 He spoke to students about why it is important to be multilingual and encouraged them to continue their learning of languages and even learn new languages.

“Often people ask me back home why we need to study foreign languages, what is the point,” Pasi said, implying that the IGS community would already be well aware of the advantages.

“And I have just three brief things for you.

“We live in a globalised world.

“Now more than ever before you are not only going to travel but have leisure time in countries, and you will work in a profession where you will need to travel or work with people who don’t necessarily speak your mother tongue as their first language, so it is good to know these different languages.”

Pasi said learning foreign languages also has benefits for other areas of learning.

“There’s a a lot of research that shows those people who actively learn other languages are also better learners at other things like mathematics and science.

“Thirdly, language is key to culture. It is much easier to understand other cultures if you can speak at least a little bit of the language.

“This little bit of foreign language could take you much further.

“I thank you for having me here, I hope you will have a great break and I appeal for you to continue learning languages.” 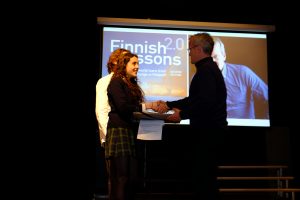 A pawfect first day of School for Pepper Potts