IGS Science students were front and centre at a recent studio audience for the filming of Stargazing with English Physicist, Professor Brian Cox.

Science Teacher Claire Loh recently accompanied a group of students from Years 10 and 11 to the ABC studio audience, which celebrated 50 years since man walked on the moon.

Claire said it was an amazing opportunity for the students to see new Australian Space Agency Head Dr Megan Clark.

“How amazing for the young women from our School to see a woman in charge of a space agency,” Claire said.

“She talked about lots of cool opportunities for our next generation in science and technology here in Australia which was deeply inspiring.”

Prof Brian Cox interviewed the Australians who worked to bring the TV pictures of the moon landing to earth via the Honeysuckle Creek Tracking Station and Parkes Observatory “so that they could be sent to Houston for broadcast to the world”. 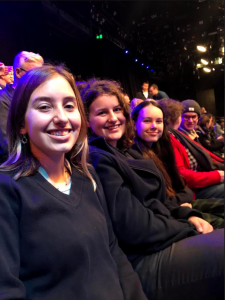 IGS student Annabelle said the highlight of the night was learning about the moon and the effect it has on the Earth.

“One of the reasons I wanted to go was because I’m interested in astronomy, and I have taken away a curiosity to learn more,” Annabelle said.

“It was an interesting experience, and it inspired me to learn more about stargazing.”

Amelia said the show was inspiring and showed her that with hard work and dedication, you can achieve any goal – even becoming an astronaut.

“The show did make me look forward to the future of space exploration and travel, and the prospect of going to Mars which is becoming likely for the near future,” she said.

“Science is one of the fields I am looking into pursuing as a career.

“What is important to me is making a positive difference in the world, and a career in science is definitely one of the ways I can do this.”