Year 8 IGS student Jacob who participates in skateboarding for Sport has reflected on the group's progress this year.

Jacob said the tricks, which seemed “far fetched” to begin with are now a walk in the park for the group, who have begun learning more advanced and spectacular manouevres.

The group practice at Waterloo Skate Park each Tuesday with guidance from PDHPE Teacher Amanda Ghorra.

“The cracking of kickflips and students attempting rock and rolls led by Ms Ghorra has put a smile on our faces while she encourages us to do our best,” Jacob said. 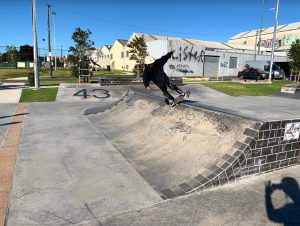 “These tricks have become a walk in the park, now we’re attempting more advanced tricks like 180 ollies off benches and 360 flips.”

Jacob said the team has made a SKATE acronym with each letter representing a different level of skateboarding.

He said ‘E’ involved completing tricks like the 360 flips. Just one student has achieved this elite trick so far.

Despite the complexity of the tricks, Jacob said it never stops the spirits of the skaters.

Sustainable Futures fundraise for our forests