Paul said it was great to see former IGS students making their way in NYC. They met up at Roberta’s pizza bar. 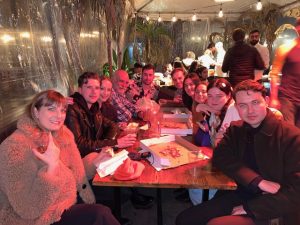 Rosie Peck (2011) said it was so great to catch up with everyone who came, “many of whom I hadn’t seen in 10 or so years, and hear the very different, but all very exciting, things they are doing here.”

“I’m currently working for a healthcare startup based in New York, mostly focused on innovative and digital models of primary care.”

Documentary filmmaker Finn Boyle (2010) said he most enjoyed “the feeling that even when you’re thousands of miles away in another country, you still have a connection to the IGS community, and being able to come together with ex-students in the most unlikely of places is a really special thing”.

“I think it’s unique to the School,” said Finn said, “not to mention being able to re-live some of Mr Galea’s classic stories that I remembered so vividly from my Year 10 history classes.”

“I’ve had a really interesting time in this city and met some truly amazing people and I encourage anyone who’s thinking about it to give New York City a go.” 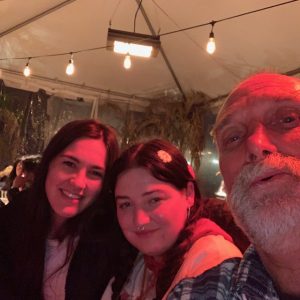 Conor Florance (2010) said it was amazing hanging out with Paul again and it was great catching up after all this time.

“I don’t believe I’d seen most of the attendees for about 10 years!” Conor said. “I didn’t know most of those people lived in New York and it was great to find out each person there is doing so well in their own right. As for what I’m up to, I live in Williamsburg, Brooklyn, and work as an Account Director for advertising and representation agency DMA United.”

Niamh Galea said “The reunion was wonderful. I was worried that I would be the youngest person there and that I wouldn’t be able to keep up. Everyone was so wonderful and thoughtful, and it was great to hear their memories of dad and other teachers who mean a lot to me too, like Ms Blacker, who both Sam and I had for Economics.” 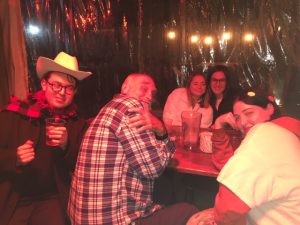 “I’m in New York completing my Masters in Fashion Design and Society at The New School (Parsons).  So far it’s proving to be an amazing course with a focus on all the things I care about: inclusive fashion design, social, ethical and environmental impact, as well as feeling incredibly connected to the International Fashion Industry in a way you could never be in Sydney.”

Alexander Miltenyi (2006) has been working in New York for five years in mergers and acquisitions.

“When I first came to the city I was working in investment banking, but after about three years I’d had enough and moved over to the corporate buy-side. I worked doing in-house M&A for Mercer for about 12 months before moving to my current job at WeWork, where I’m currently a senior manager on the Mergers & Acquisitions team.

“It’s been a crazy five years here, but there is nowhere like New York.”

Alexander said it was great to catch up with Paul Galea and to hear all about how IGS has changed since he left.

They thanked IGS Director of Advancement Julia Glass for organising “such a wonderful event”.