IGS students competed in the first round of debates of the HICES season at St Spyridon College recently.

The passionate debaters are being coached this year by IGS alumni and talented debaters, Belle Campbell (2017), Phoebe Finlayson (2015), and Imogen Gray (2019).

The students who competed during Week 5 of Term 1 are among 30 students who attend the Debating Club every Wednesday at lunchtime. 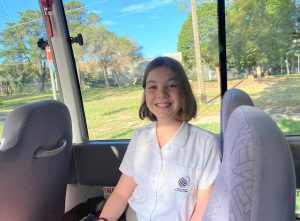 Middle Team, consisting of Gemma, Bruno, and Emilia won their affirmative argument that “training in fighting bushfires should be mandatory for all high school students”.

“These students won their debate,” Ms Sampson said. “They are the only group who are given their topic well in advance. These students have been diligently researching and preparing arguments for the past few weeks and turned up ready and raring to go, speeches in hand.”

The IGS Senior Team of Harriet, Madiba, Ash, Fredi and Nathan won their affirmative argument that “as a nation, we should spend more money on the environment than defence”. 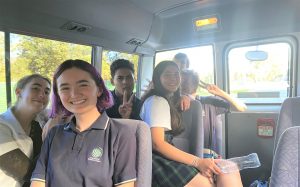 The Open Team of Maya, Louis and Felix narrowly lost their debate, arguing against the topic “The 5G network should not be rolled out anywhere until it can be rolled out all at once”.

Ms Sampson commended the team on tackling such a highly challenging topic.

“I am forced to think on my feet about real-world topics, which sometimes you don’t want to be on a side for. This challenges you not just mentally but also creatively. Coming up with a point within 45 minutes, creating practical and principle examples to back those points up is quite challenging,” Maya said.

“As the first negative speaker for my team, I had to improvise on the spot.

“Our second speaker, who had never debated before had two amazing points which he had thought of during the debate and delivered a very convincing argument, allowing our third speaker to sum up our case very strongly.”

Madiba said he loves debating because it’s a good way to get his mind off of everything.

“For an hour, all I’m thinking about is what my arguments are going to be and how I can help my team with their arguments. I really enjoy the team environment and how everyone is trying to help each other be their best.”