Seeking feedback from teachers, keeping things in perspective, and putting in effort to reap rewards were among their top tips.

Ana was unable to join the assembly as she was attending her first session as a first-year student at Arts/Law at the University of Sydney.

“Ana just loved to learn,” Principal Shauna Colnan told the assembly, adding that Ana chose the subjects which most interested her, including humanities and languages.

“Ultimately, the students who tend to do best have gone past worrying about their marks. They are there to learn and they love what they learn. Ana chose what she wanted to study and couldn’t get enough of the learning that was available to her. She respected her teachers, and took on board their feedback tenaciously while learning deeply.

“I admire her enormously as I watched her go through the HSC in the top 0.1 per cent of the State.” Ms Colnan added that Ana had attended IGS since Preschool. 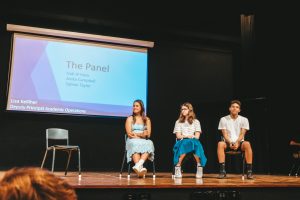 While each student had a slightly different approach, each achieved excellent results.

They shared their views on the importance of goal setting, their approach to study, subject selection and seeking detailed feedback from teachers on how to improve their assessment and exam results.

For Sabine, being organised, taking careful notes and typing them up each day after school paid dividends, helping her during assessment tasks and practice exams.

Anika noted that having a study timetable helped her visualise how much time she actually had.

Fadi advised that it was never too late to get back on track and study hard.

Sabine said: “If you work hard, it will pay off. There’s no other secret.”

Lisa said that the HSC year offered many highlights as well as challenges, and the alumni agreed, saying they enjoyed time with friends and the IGS community, and that there was life after the HSC.

Students thanked the alumni as well as Bianca Kotoulas and George Catt, who had opened the assembly with a stirring vocal and bass performance of What’s Going On. 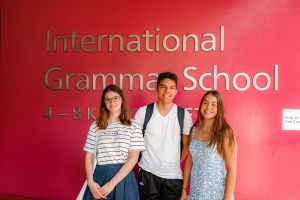 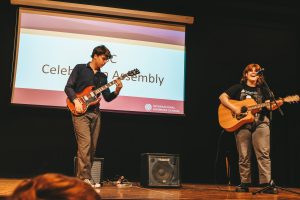