IGS is thrilled for 2018 Head Girl Mi-kaisha Masella, who was recently named the 2019 National NAIDOC Youth of the Year.

The former IGS Indigenous Scholar accepted the award in Canberra, which recognises the achievements of Aboriginal and Torres Strait Islander people.

In addition, Mi-kaisha was commissioned to compose and perform a short harp piece alongside a didgeridoo player, as part of the opening of the awards.

Her mother Kristy said it was her first time performing harp and couldn’t have imagined a more grand occasion, “2,000 people, live TV, no pressure!.”

Kristy said her performance was a surprise for everyone in attendance.

“John and I are so humbled that our girl and her work has been acknowledged by the Indigenous community on a national scale- what a privilege,” Kristy said. 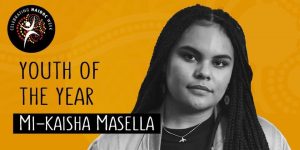 “The one purpose that I have always had behind my music is making sure that I am giving people a voice, that I’m sharing a story and a message that needs to be heard,” Mi-kaisha said in a NITV video.

“I guess I feel a responsibility to my family, to my community and my mob, because I have that choice.

Mi-kaisha is also the first Indigenous Australian to be accepted into the Clive Davis Institute of Recorded Music at New York University.

“Mi-kaisha will do us all proud as she travels off country to New York and continues to use her music and profile to raise important issues that impact on our communities,” Kristy said.