Congratulations to Class of 2021 graduate Henry Andersen who received an early offer to study a Bachelor of Archaeology at Macquarie University.

Henry said he “felt a sense of relief at the news”.

“I’d been hoping for an early offer from Macquarie and had put down both Ancient History and Archaeology on my UAC,” he said.

“However, I forgot to check my personal email for the news on the day and thought I’d missed out. Luckily I was scrolling through it for unrelated reasons the next day and spotted it hiding in my inbox.

“Right after I saw the email I called up my parents and told them both,” Henry said.

“I hope to work in the field of archaeology, inspired by the opportunities I’ve had at School to explore the use of different sources in history class.

“This year, I completed a Major Work for History Extension which delved into the archaeological practices of Germany during their darker years from the end of the German Empire and throughout the Third Reich.

“Researching the turmoil within the academic discipline and the politically and racially motivated misuse of archeological technique and findings.

“As I studied the history of the field during this period I got to look at how the archaeological method has changed over time, in order to compare and contrast it with the early 20th century German practice.” 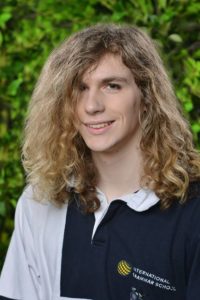 “The support of Mr Miller and Dr Westcott in Modern History, Ancient History and History Extension have been invaluable in not only navigating this year but also in inspiring further studies into fascinating periods and conflicts, such as Soviet Russia from 1917 to 1941 and 4th Century Greece or Ancient Sparta,” Henry said.

“I have been able to use archaeological sources, such as the Pylos Archaeological Survey of Messenia in Ancient History or the uncovering of where the Romanov family were killed in Russia for Modern history, during the course of this year through their teaching.

“Dr Westcott, as my mentor, has also been helpful as I figured out what I wanted to study over the next few years.

“I’d like to thank all my teachers for their support, not just in History, but throughout this year. Ms Bolt, Mr Marchbank and Ms Colnan have helped me develop my writing and ability to explore and convey ideas in Advanced and Extension English and Lucy Sensei in Japanese has encouraged myself and others in my class to explore other cultures through their language, an invaluable thing for anyone working in a historical field such as archaeology.”

Henry said the greatest highlights of being a student at IGS included the opportunities to engage with the wider school community during events such as ArtsFest.

He also noted the great relationships that teachers have with their students and the quality of teaching at IGS.

“As someone who moved to IGS halfway through Year 10, this School in that regard is definitely a cut above the rest, in my opinion.”

Alum of the Year nominations roll in