Year 10 Drama students performed their wonderful scenes for an audience in the Drama Centre’s Commedia Playhouse In Week 8 of Term 4.

“They acted, directed, designed and stage managed their performance. It was a joy to watch their hard work finally come together under the stage lights. Congratulations Year 10 Drama!,” IGS Director of Dramatic Arts Rita Morabito said.

Annabel, of Year 10 set out to complete both a group performance and a monologue.

“When we started or performance task last term, I was ecstatic. But with all the restrictions, it was hard to rehearse. This made me think that it may be better just to do a monologue, but I couldn’t just leave my friends without a group member, so I set out to do both,” she said. 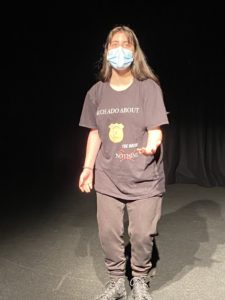 “I knew this would be a difficult task, but if I planned it well, I knew I could put out two incredible performances. I am so incredibly lucky to have done both as they were so much fun. My monologue performance is titled Daisy Moon Was Born This Way and it was written by Emily Sheehan.”

Hugo, also of Year 10, performed a skit from Monty Python as a group.

“Our group did an extremely rare Monty Python skit that only aired in Germany. The piece is known as “The Hearing Aid Sketch” but it doesn’t officially have a title due to its obscure nature. We worked on it throughout lockdown and finally got to perform to a real audience for the first time and bring it to life in the drama space. It was challenging to turn our filmed Zoom sketch into a more three dimensional performance that fully utilised the space,” Hugo said.

“We were met with lots of laughter from the audience as we realised our characters on stage. We were really happy with the outcome of all our hard work, hopefully we can create more amazing pieces of drama in the future.”

Lucy, of Year 10 performed with Maya, Annabel and Lola in a group performance of And Now We Wait by Stephanie Clark.

“The play follows a group of students named Rose, Emily, Britt and Luke when they are trapped together in their school’s theatre during a school shooting. We watch as high school drama unfolds under the pressure of their dangerous circumstances. This challenged us to understand emotions and situations we otherwise wouldn’t. Our research on Stanislavski’s realism developing techniques greatly benefited our performance and allowed us to grow our
characters,” Lucy said.