IGS student Grace Truman, of Year 10 has been recognised as an inspirational young Australian.

Grace was recently featured in the book Stand Up for the Future, which highlights exceptional young people who are building a brighter tomorrow.

Grace had no idea she had been mentioned in the book, and it was Primary Librarian Karen McBride who made the discovery.

Grace, who lost her dad suddenly when she was 10 years old, started a web series called “Amazing Grace” to help keep the memories of her dad alive and to also help other young people going through difficult situations.

“Through activism, innovation, giving back and leading by example, these game changers are building a brighter tomorrow,” the book reads. 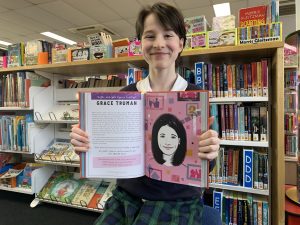 “The sadness and loss Grace experienced was terrible and she worried that her memories of her father were fading,” the book reads.

“The purpose of the series was to help her keep a connected to her dad and to remember how he used to listen, love and empower her to make her own decisions.”

The 15 year old said the “whole idea of the web series was to celebrate my dad and keep my dad’s memories alive by sharing the stories that he could have shared with me if he were here.”

“When I get stuck I imagine my dad and basically he is there to support me, but ultimately I use his advice to decide for myself what I need to do next.”

Grace developed the web series alongside her filmmaker mum and even recruited Australian actress Justine Clarke. 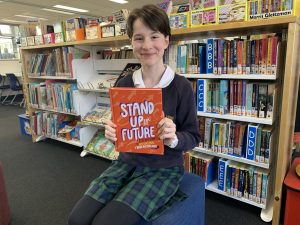 With eight episodes already done, she has just received more funding and has scripted another six more episodes.

“The script writing process can sometimes be challenging but it’s really rewarding to mum and I; it really helps us celebrate my dad.”

Grace said she was “totally surprised and delighted” to discover she had been featured in the book.

“It is truly an honour that they chose to share my story and to be among such extraordinary company in this book.”

An art star is born!