Plenty of fun in fundraiser

Assistance Dogs Australia “Top Dog” Richard Lord presented, ahead of the IGS Who Let the Dogs Out? fundraiser for the cause. 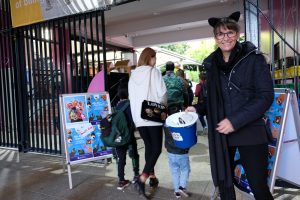 Year 4 volunteers were out in force collecting gold coins first thing in the morning, while Senior Orchestra gave advance performances of Merrill’s “How much is that doggie in the window?” and Gershwin’s “Walking the dog”.

Richard explained that Assistance Dogs Australia was established 23 years ago, ahead of Guide Dogs for people with visual impairment, and helps people of all ages with physical disabilities and early onset dementia, children and families living with autism, people living with Post Traumatic Stress Disorder and their families, and eligible children with special needs in schools. 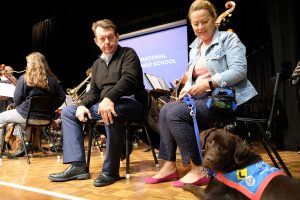 The organisation now breeds its own dogs, mostly labradors and golden retrievers, and begins their training as puppies in correctional centres, including Juvenile Justice centres, bringing mutual benefits.

It is internationally accredited and has qualified dog trainers and occupational therapists. 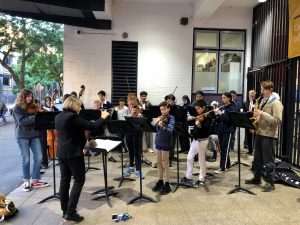 IGS Director of Music Alison Housley said it was the realisation of a long held dream to hold a concert to raise funds for animals, a career highlight.

Richard said Isaac, still a “learner”, was fortunate to attend a concert as it assisted in providing the wide range of experiences which would benefit his training.