Students in Years 7 and 8 set out on a range of language adventures recently.

They created logos for their dream Italian restaurant and transferred the design of the logo onto aprons, then created a recipe book of their favourite Italian recipes. 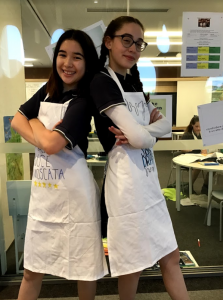 Students of French went to the cinema to watch a beautiful, timeless film, L’école buissonnière, or School of life, and then travelled to Circular Quay together to Four Frogs restaurant to eat delicous crêpes. 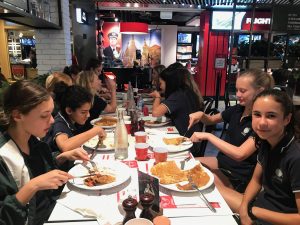 Students of German chose an active outing as travel bloggers which began with an 11 km hike from Clontarf reserve to Manly. Later students were rewarded with a typical Bavarian lunch at the Bavarian in Manly. Students returned to IGS by ferry.

Students of Japanese began the day at the Japan Foundation where they took part in several workshops which included Manga, Furoshiki gift wrapping and information about important customs when visiting Japanese homes.

For lunch, students enjoyed Obento. Back at school they participated in a calligraphy workshop run by the Consulate-General of Japan in Sydney, Mr Matsuo.

Congratulations to everyone involved in a highly enjoyable day which broadened language skills and deepened cultural understanding for all.