It's a busy week at IGS with the SAGE program well underway.

Year 7 have dived deep into learning about Shakespeare, while Year 8 are at the Rocks, Year 9 is engrossed in Opera on Kelly Street and Year 10 is in Tasmania: Writing the Island.

At the Year 7 Shakespeare Bootcamp on Tuesday, students were shown two very different interpretations of the same words. 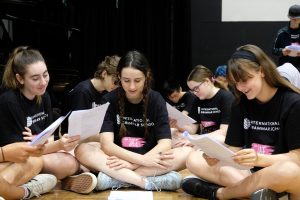 “That’s what is beautiful about Shakespeare,” a Sport for Jove professional shared with them.

“We get to decide what sort of a human being we want to portray, and every single actor that comes to these roles is going to bring something different. That’s why we still performing these 450 years after they were written, even though they are in this language that most of us don’t speak and find hard to read sometimes.”

In the IGS Hall, Year 9 made smooth progress on their scriptwriting.

Iris and Isabella said it had been very exciting putting their script to music. 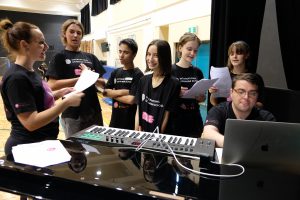 “It’s fun because you get to put your own rhythm to it,” Isabella said.

Students have been split into groups and are each required to create a script.

Iris said her group decided on a murder mystery.

“We had characters and decided that a murder mystery theme would tie it all together,” she said.

“We have had to really step outside of our comfort zone.”

Students will rehearse for roles on Wednesday and will perform their work to an audience on Friday.

The 2019 SAGE Week will run from Monday 11 to Friday 15 November in Term 4.  SAGE was introduced by Principal Shauna Colnan five years ago, and grows from strength to strength each year.

View news of Year 8 and Year 10 out and about during SAGE Week.