An HSC major work composed to accompany a friend's film script has been nominated for ENCORE.

“I chose this name as I wrote this for a scene from my friend Jake Lacy’s English Extension 2 major work, which was a film script,” Oscar said.

“The scene involved the two main characters landing on a planet named Lanturnia, and my composition was written to accompany this scene.”

“I feel very surprised!” said Oscar, who is well-know to the IGS community for his roles as a Bamal leader and in the musical Grease in 2019.

“I didn’t expect it at all, it’s an honour to receive the nomination.”

Oscar said the best thing about studying music was having the opportunity to learn about different aspects of music he had never previously explored.

“The topics which we studied, in particular film music, taught me the conventions and methods for composing.”

His tips for younger students?

“I can only speak for Music 1 students as that is the subject which I did, but I would say that the key to succeeding is commitment, practice and perseverance above all else.

“Music requires a high level of commitment from the very beginning of the Year 12 course in October, which needs to be sustained through the entire year.

“It drains you, but that commitment to practising repertoire, to composing new material, to seeking feedback or whatever it is that you do is crucial.”

“I enjoyed the class environment the most, being with friends and being supported by teachers who care for you and are always looking for ways to help you improve.” 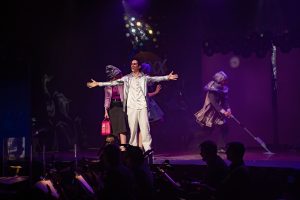 The news follows OnSTAGE nominations for eight Drama graduates of the IGS Class of 2020.

Going even greener at IGS