The celebration was a big hit this week among IGS Preschool and Transition students, who created their own hat to represent themselves and their passions.

Director of Early Learning, Rebecca said a Cultural Hat Parade, rather than an Easter Hat Parade was a perfect fit for the IGS Unity Through Diversity motto.

Students were encouraged to prepare a hat that represents something that is meaningful to them, whether it was inspired by their cultural heritage or their favourite food.

“It is to reinforce who they are and celebrate that,” Rebecca said.

“Some families were asking about whether we would do an Easter Hat Parade, so we decided after the holidays we would have a Cultural Hat Parade where they could represent anything that is meaningful to them.

“It also falls at a time of the year where we are focusing on a sense of belonging.” 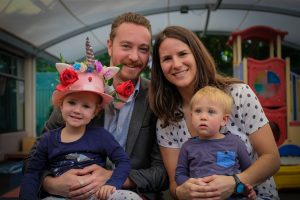 “It’s a combination of her favourite things which would be lady bugs, unicorns and flowers,” Mr Adamik said.

“Red is her favourite colour, so we had to make sure it had red flowers.

“We made it together, but she told me where she wanted everything to go. It was a team effort on that one.”

Mrs Adamik said it was nice to see the students create something that “says a little bit about who they are and what they like, and parade it to everyone.”

And Mark said it was great to see the diversity in the room and the children’s different cultural backgrounds.

Rebecca said she was so impressed with what the children came up with and was “really impressed, after talking to some of the parents, to see how determined the children were”.

“They had their ideas of who they were rather than fit this cliché that it had to be an Easter hat only.”