Congratulations to all the IGS students who have achieved bronze and silver awards in the Duke of Edinburgh's Awards scheme.

About 20 IGS student were honoured at an assembly this term, including Emil, Maya and Donovan, who received silver medals. 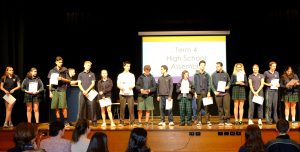 “This award can be compared to running a marathon,” said PDHPE teacher Lyndon Kleeman.

“These student are required to complete a minimum of 39 hours of community service, develop a skill, and participate in a physical activity. They also participate in two overnight camps in the beautiful Kangaroo Valley.

“They have shown commitment, dedication, patience and integrity.” 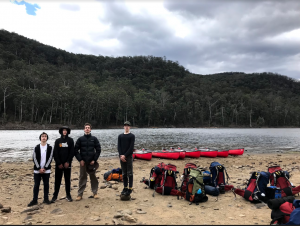 Acting Deputy Principal Students and Campus Life Paul Galea added that achievement in the D of E scheme was so well recognised that job seekers who had won the awards were more likely to win roles than those without.

Emil, who received the silver award, said undertaking D of E activities improved his way of life, and made him a healthier and more active person.

“I would highly recommend students taking part of the Duke of Ed Award, as it ensures that students have regular exercise, and community service, as a scheduled part of their life, which sets them up for a healthy lifestyle in which they are active in the community,” Emil said.

“Doing the Duke of Ed award also encourages students to develop a skill through doing a hobby they enjoy. As well as this, by going on camps, students learn outdoor skills, as well as resilience, and teamwork.

“Doing Duke of Ed teaches students various life skills, and trains them to have a good healthy lifestyle, through regular scheduled activities. Students can carry this with them after doing the award, making them well equipped for life after school.”

Donovan said his greatest challenge was hiking the 65km Overland Track in Tasmania.

“I made sure to come prepared with plenty of water and good morale so that the hike wouldn’t be as mentally and physically stressing,” Donovan said, adding that the silver award was a big step up from the bronze one.

Donovan also encouraged other students to challenge themselves and become involved.

“I would definitely recommend this to other students as it helps you with time management and gives you something to work on during your high-school years.”

Learning taken to new heights with visit from Qantas Pilots