IGS was honoured to welcome three members of the extended Biggs family whose generosity gave the School a home in its earliest years and continues to assist all students.

Eugenia, Danny and Victor Biggs visited to see the twin portraits of Eugenia and the late Martin Biggs, founders of the Marbig stationery company, who granted IGS the use of their premises since 1999. 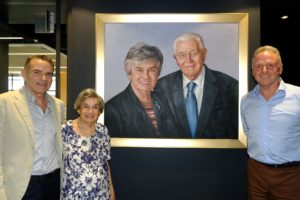 The Biggs’ properties include the Wright Building, at 30 Bay Street, the land on which the Kerrie Murphy Building was built, and the building housing the Design Centre.

“IGS is part of my life,” said Eugenia. “Good memories, especially seeing now what a beautiful school it is.

“That we were instrumental somehow in allowing it to expand here gives me great pleasure, and my sons here will continue with this.”

Danny, one of their sons, said his parents had been pleased to support the School over many years.

The portrait surpassed his expectations, he said.

Both men remembered helping out in the factory when they were students of Pharmacy and Medicine at the University of Sydney. They remembered the Wright Building bricks, ironbark beams and “one of the oldest lifts in the city, a goods lift,” as well as their own hard work in the business.

A trace of the old signage, “Martin Biggs and Sons,” still shows on the exterior of the building. 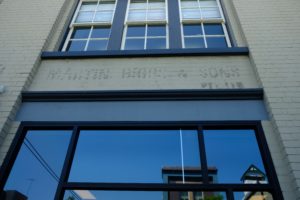 The visitors also remembered pigeons roosting in the top floor of the Wright building, and were amused to hear from Director of Drama Rita Morabito, who has served at IGS for 37 years, that the pigeons were only evicted during the building’s most recent refurbishment.

Rita explained the vision of IGS founder Reg St Leon OAM as a place where children could experience bilingual immersion from the age of 3 to 18, learning to speak, understand and perform with confidence in more than one language.

Son Victor said the painting was very lifelike, particularly the eyes, adding that he appreciated the School’s gesture in commissioning the painting.

“To have the painting there in perpetuity; I think it’s very nice,” he said.

The Biggs were given a brief tour of parts of the School, including the Centre for the Dramatic Arts in which the painting is hung on the third floor, The Imaginarium, and the Fitness Centre on the ground floor of the Kerrie Murphy Building. 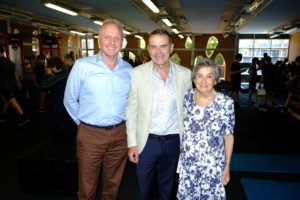 Eugenia’s role in the business was “girl Friday, doing whatever was needed,” she said, adding that the interior was now “very, very modern; very nice”.

She later accompanied Martin on international business trips as the company continued to flourish. Both retained a strong interest in IGS, with Martin’s sharp eye for detail detecting a leaking water main in the Wright Building through his thorough scrutiny of a services bill.

In the IGS Learning Journeys 30th anniversary history book, 1984 to 2014, Martin explained how he and Eugenia were about to go overseas when he received a phone call from an IGS architect seeking permission for a surveyor to inspect his then-empty 30 Bay Street premises, as she was trying to arrange some plans to expand the School.

“Even today I can’t explain why I had the impulse to immediately contact the managing agent,” Martin is quoted. “If I hadn’t done that, the School would have had to find somewhere else and the outcome may have been completely different.”

Martin, born in Poland, spent much of World War II in concentration camps. He migrated to England in 1947 where he married Eugenia, and the couple moved to Australia in 1952, establishing their business in 1973. 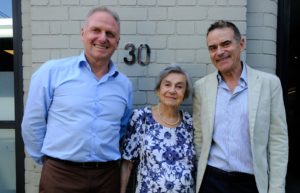 Martin has said his school days were the most enjoyable period of his life, and that IGS reminded him of his old school, also coeducational and teaching various languages.

Martin has described the Biggs’ relationship with IGS as a “both mutually beneficial and mutually respectful”.

“I think it’s a very happy arrangement for both parties…,” he said.

Eugenia and Martin’s portrait was painted by Dave Thomas, whose portrait of Reg St Leon OAM stands in the IGS Bibliothèque.

Congratulations to the IGS Class of 2022