Early Childhood Teacher Miriam Jones has worked on a very special creative project with her children, stemming from their interest in sharks.

“Early on in Term 1, I could see that a number of children had a strong interest in sharks and sea creatures. As a way of getting to know the children, I asked whether they would like to write a song about sharks. They were eager, so we sat down with pen and paper, and workshopped what we might want to say about sharks.

“I asked some questions to prompt children’s thinking, like ‘what do sharks look like?’ and ‘what do sharks eat?’ The children didn’t need much prompting, and soon a dramatic narrative of a shark who wants to go to America emerged.” 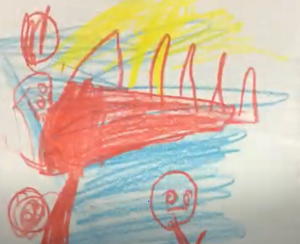 Over nine weeks the children edited the lyrics, drew images, learnt how to use iMovie, recorded and reviewed multiple versions of the song, discussed dynamics, vocal warm-ups and articulation, and finally shared it with their families.

“It was a sustained and endlessly creative effort from the children, and the song became a link between our two-day and three-day cohorts, a strange kind of class anthem! I can’t wait to see what we might create in Term 2.”

Watch the children’s shark song and video below.

Music and Movement in Early Learning