Year 4 IGS student Arlo Temple is celebrating after his historical fiction short story “The Parade” was a winning piece at the Better Read Kids Writing Competition.

Arlo, who is the son of highly acclaimed authors Kate and Jol Temple, had his winning story published in this year’s Heroes and Villains anthology, which includes work from young authors under the age of 30. 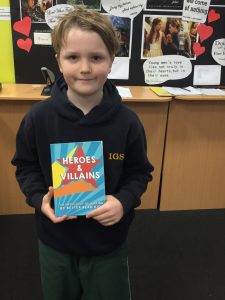 Arlo read his winning entry, a historical fiction set in World War II, to a packed room of young writers, readers and their parents.

His mum Kate said Arlo loves to read and write stories about history, and is particularly interested in World War 2.

Arlo’s story, which took just three days to write, is set in 1933 at a Nazi Rally.

“It is about a young German boy who makes the brave decision not to hail Hitler, and his decision has terrifying consequences,” Kate said.

“Arlo was inspired to write the story because of his interest in WWII and the many books he has read on the topic. 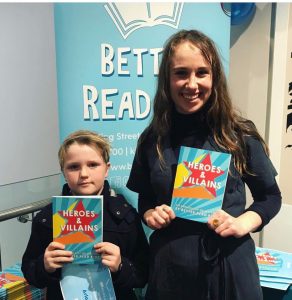 “He researched his story by looking at photos of Nuremberg in 1933 and reading about what life was like before the start of WWII in Germany.

“He was also inspired by the idea of small acts that make a big difference and the people who live and survive in places in war and conflict.”

The judges praised Arlo’s story for being full of “poignant moments and an innovative interpretation on the theme”.

Arlo is now preparing to write his next short story and plans to write about Cambodia.

The book has been donated to the school.

A lesson in gratitude

Meet our Head of Kindergarten to Year 2