In a series of respectful ANZAC ceremonies in the Bibliothèque, IGS students remembered and paid their respects to fallen Australian service personnel, including First Nations people, and to those serving in peace-keeping missions.

For the Primary School assemblies, Head of Primary School Colin Bird shared the history of ANZAC Day while Principal Shauna Colnan explained the significance of rosemary, shared a photograph of her great grandmother’s twin brother, James, who went to serve in World War I at 18 and never returned, and read The Photograph by Peter Kocan. In the High School assembly students also heard an address from Head Boy Orlando Read and Head Girl Grace Truman.

“When they came ashore at Gallipoli more than 100 years ago, the soldiers noticed this beautiful herb growing wild across the rugged hillsides,” Ms Colnan said.

“Then an Australian soldier who had been injured brought a small bush back home with him to South Australia from the Gallipoli peninsular. It was planted it in the hospital grounds. It grew beautifully and word spread. In the years that followed, Rosemary was planted all over Australia.”

Wearing rosemary on ANZAC Day became a tradition from 1916. 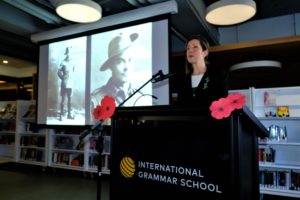 Ms Colnan said the youngest ANZAC to die was only 14 years old, having lied about his age to serve.

“ANZAC Day reminds us that we need the world to be a safe and peaceful place where people live in harmony,” Ms Colnan said.

“This vision of peace is what the world needs right now.” 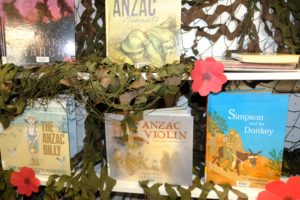 Students and staff heard the Ode, the fourth stanza of the poem For the Fallen by Laurence Binyon, written in the early days of World War I.

“They shall grow not old, as we that are left grow old;
Age shall not weary them, nor the years condemn.
At the going down of the sun and in the morning
We will remember them.”

They heard the Last Post and showed their respect by observing a minute’s silence with heads bowed.

Music and Movement in Early Learning